After I spent 9 days here over the two weeks around the 4th of July, the kitty and I had settled right in. So before leaving last weekend, we went to one of those big box pet stores and got a timed cat feeder. The battery operated electronic model with bells and whistles is $100. We didn’t get that one. We bought a perfectly serviceable gravity model for $19.95. We filled it (almost a whole bag of food) and the kitty was happily trying it out on the back porch as we left. 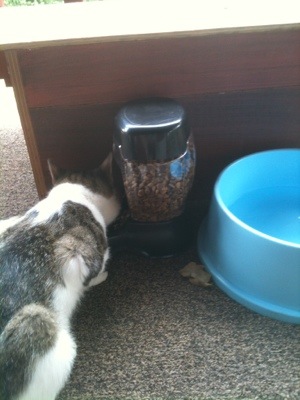 We anxiously wondered if he had eaten all the food when we arrived next Saturday morning. A quick look at the scene left us wondering some more. The feeder was broken apart, on its side in two pieces, and licked clean.

We waited for the kitty to return and explain. Somehow it didn’t seem like our sweetheart of a kitty would do violence to his food bowl.

He never showed up, so we had to make do with our neighbor, Betty, who has joint custody of the kitty. She knew right away. “Raccoons,” she said ominously. “They’re mean! Clara always had trouble with them. She had one in the house once.” We nodded; we’d heard that story. They would come right in her kitty door. Betty’s husband, Chuck, once brought a ball bat over to rid the house of a raccoon. “Don’t kill it,” Clara told him, “It will get blood all over the carpet.” He got it safely out with no blood spilled.

So that evening we baited the feeder and put it right outside the sliding glass door that goes out to the back deck — just feet from our bed. Around 4 AM we were awakened by a raccoon rolling the feeder all around the porch. I’m sorry to say it was too dark for pictures; however, we did get this picture as evidence the next day. 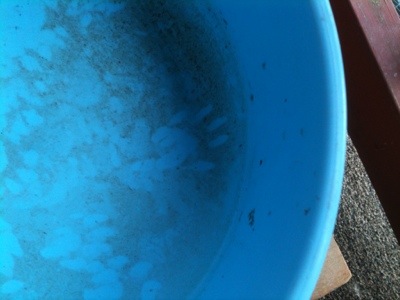 Mr. Kitty, George, Elmo, Phineas, or whatever his name is, didn’t show up until late Monday morning as we were packing up to leave. His face was swollen on the left side, as if he had been in a cat fight and lost. Change of plans… We found a vet who could see him later that day.

It’s always an adventure to take a kitty in the car. The last two times we’ve tried taking him it has been a smelly Disaster (notice the capital D!). Both times we were good, responsible parents and put him in the kitty carrier. Both times he thought it was his litter box. THIS time we were wary. Michael insisted we not use the carrier and just hold him. It was tough getting a volunteer for this job; memories of the last two times were still fresh. It was pretty quiet while we waited for someone to raise their hand. Michael finally volunteered for the dirty job — he always does!

Michael was armed and prepared though. He covered the seats in blankets and tarps; he had a roll of paper towels, wet wipes, a pillow, three towels, Spray’n’Wash, 409, Windex, latex gloves, and air freshener. All unnecessary — Mr. Kitty was Mr. Perfectly Behaved in Michael’s arms. He was so well-behaved we left him overnight for his neuter job. We’re hoping this will keep him from carousing around and fighting. And prevent any more needless trips to the vet…
Note: Michael objects to the previous paragraph on the grounds that I exaggerated and made him look like a nerd. I confess to stretching the truth for a good story — he didn’t have any 409. (He says he didn’t use any tarps either…)

When we picked the kitty up this afternoon, his face looked like raw hamburger. Everyone there agreed that it was another cat who had won, and they had probably been fighting over a girl. Hah! No more of that; he is now a catstrato! But we wonder if he tangled with a raccoon over food…

We brought him home catastrophe-free, gave him some food, petted him, and we all took a nap.

It was the hood of shame that did him in. The vet told us not to let him lick his wounds, and, of course, he did. So Michael put the hoodie around his neck (I told you he always does the dirty jobs.) Mr. Kitty was appalled. He escaped with it still on his neck and streaked across the road faster than white lightning, a speeding bullet, or a bat out of you know where… with Michael running after. It wasn’t funny.

Michael came home soon with the hoodie and no kitty. We sat glumly around outside in the heat thinking of a lost, sick kitty in the woods and $300 down the tubes.

We alerted Betty to keep a watchful eye out. She was upbeat. “Oh, he’ll come here when he gets hungry,” she said confidently. A few hours later we heard her shouting and waving. Sure enough, he was lying on her top step. She fed him and loved him up, and I brought him back over here to cottage confinement. We promised to throw away the hood of shame, and he has been sleeping comfortably for the last few hours. 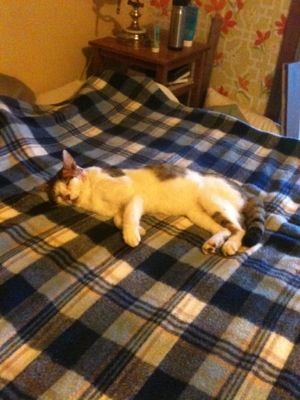 Michael looked at him a few minutes ago and said, “Poor little fella. He’s had a rough couple of days.” Yes. So have we.

Addendum — Next day : Kitty woke me up at 4 am staring out the sliding glass doors and growling like a dog! There were two raccoons on the porch, a mama and a young’un. Now we’re even more convinced that is who he tangled with. Glad he was on the inside looking out.