I may have never been diagnosed with Seasonal Affective Disorder, but I’m sure that I suffer from it. It would be perfectly fine with me if I could just hibernate all winter and wake up about March 21. To document the misery, WorldAtlas.com lists Pittsburgh, Pennsylvania as THE CLOUDIEST CITY in the United States, averaging 2021 hours of sunlight per year. 77% cloudy. Who knew? I thought surely Portland had us in the cloudy department; after all, Portland is known for rainy weather. According to the WorldAtlas, western PA is so cloudy (especially in winter) because the Northern Jetstream likes to hang out here.

So, I guess I’m whining. The sun was out for a few hours today, and I put my flowering azalea outside to drink in some weak Western PA January sun.

I bought it late (straight from Home Depot’s half-price sale in September) to be a large potted plant outside the front door by our newly paved walk. The plan for its life in winter was vague; it was really just meant to replace the recently deceased avocado tree that I grew from seed. But that’s another story (and very indicative of my ups and downs with potted plants).

This Rhododendron ‘Conlep’ did fine all through the autumn. It’s name is Autumn Twist, after all. Mild frosts didn’t seem to bother it, but overnight one early December morning, the deer had chewed off the ends of every tender little branch.

Enraged, I brought it into the mudroom and put it by the window. I hoped it would get enough light, and I moved it back and forth between inside and outside for a few days, until the frigid 20 below Arctic blast descended around Christmas time. The wood stove was going full blast in December, and I think it must have thought spring was here when it felt the heat of the wood stove. Because a few days after Christmas, I noticed the buds. And just a few days later, there were more buds. It’s spindly; it’s been losing leaves, but oh, when those buds opened…

When I sat down to write this post, I realized that only recently I also wrote about lilacs blooming in September, and another winter post celebrated dandelions blooming in winter. I might be fixated on blooming out of season, but here’s the thing: if flowers can bloom when they aren’t supposed to, then people can thrive under cloudy, sub-optimal conditions too. I’m trying to keep this in my thoughts…

No one enjoys suffering, yet we all know that when the season of suffering is done, we can look back and see. See with new eyes what that time of suffering did for us. Perhaps it brought us new compassion, a renewed relationship, a different perspective, greater faith.

Even if one isn’t suffering or grieving, we should know that we aren’t supposed to bloom 365 days of the year. The cycles of the seasons–fluctuating light, different temperatures and humidity–affect us all, plants, animals, and humans. God has made us to need rest and quiet; January is a perfect time for rest and quiet and meditation. Even my reblooming azalea needs a time of dormancy to recharge and revitalize.

I worry now that this lovely azalea has been thrown off her natural cycle of blooming in the spring. When the showy flowers fade, what will happen to her overall health and spindly deer-chewed branches. If I fertilize her now, in what should be her dormant season, will the leaves fill out again or do they need that bright spring light for new growth?

I think this is what has happened to our modern world. We live in a time of 24 hour lights, all season heat and AC, waking in the dark, not going to bed until late. Even now I am typing this at 10:13 p.m. and most every light in the house is on. Excuse me while I go turn some of them off…

We have become modern humans, forgetting our place in the natural world. It’s January in the Northern Hemisphere: we should be slowing down, recharging, resting, sleeping. Reading, praying, meditating… Not sapping our energies with dazzling out-of-season blooms.

It is glorious when it happens, though, isn’t it?

The best, absolute best, thing that you can do for your peace of mind right now is to go  plant some seeds.

I can absolutely testify to this; vitamin D is necessary to your physical health and your emotional well being.

Cut your long winter fingernails and stick your hands in the dirt.

Gardening is hope for the future.

Gardening is planting seeds of joy.

And gardening in pots on your back porch, side porch, front porch counts too… This is the year to plant those seeds of hope.

I’m adding a link for those of you who might be new to sticking your hands in the dirt. It’s a great resource. Victory gardens 2020!

I have a postage stamp flower garden out by the mailbox. (It cost more than 49 cents to put in…) 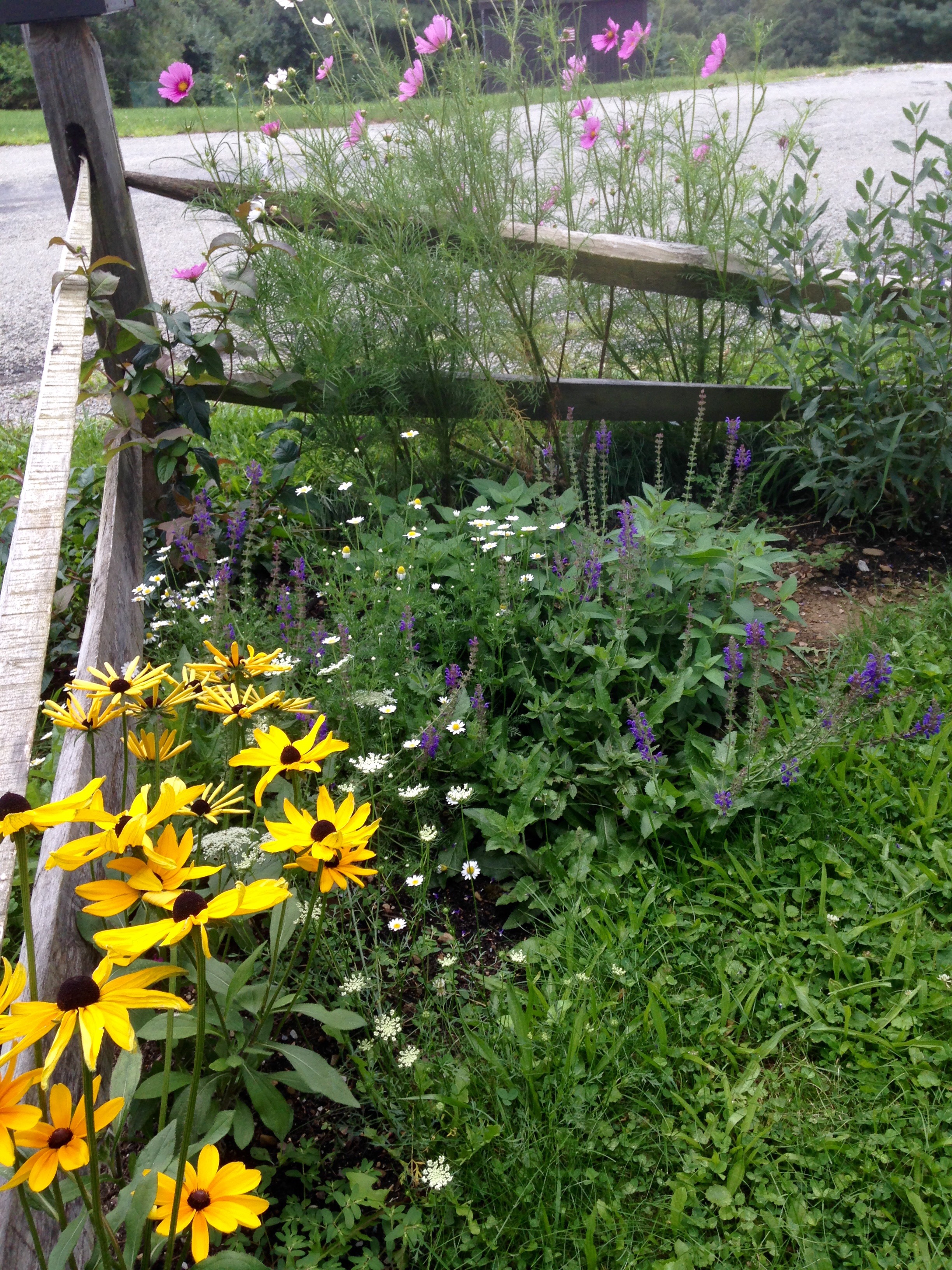 It’s filled with new perennials that decided to be first year bloomers –salvia, rudbeckia, daisies, and a bush honeysuckle. The cosmos self-seeded from last year and is blooming more profusely than ever. A caryopteris I planted last fall is just starting to get little blue fuzzy flowers; the monarda and the echinacea haven’t bloomed — they are just looking green and healthy. 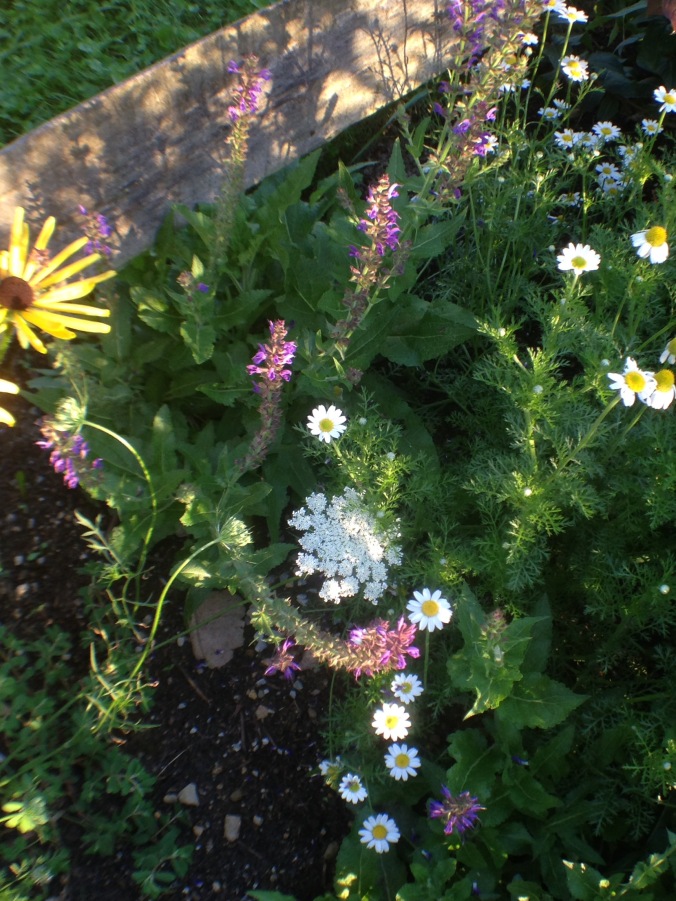 Salvia with the “weeds” — backyard daisies and Queen Anne’s Lace

The daisies were just growing wild in the back yard. I transplanted them so red, yellow, pink, purple, and white flowers will bloom together in one little garden. These are the first flowers I’ve planted since we’ve been here at the cottage; the fruit trees and the berries and the grapes and the vegetables have taken precedence. 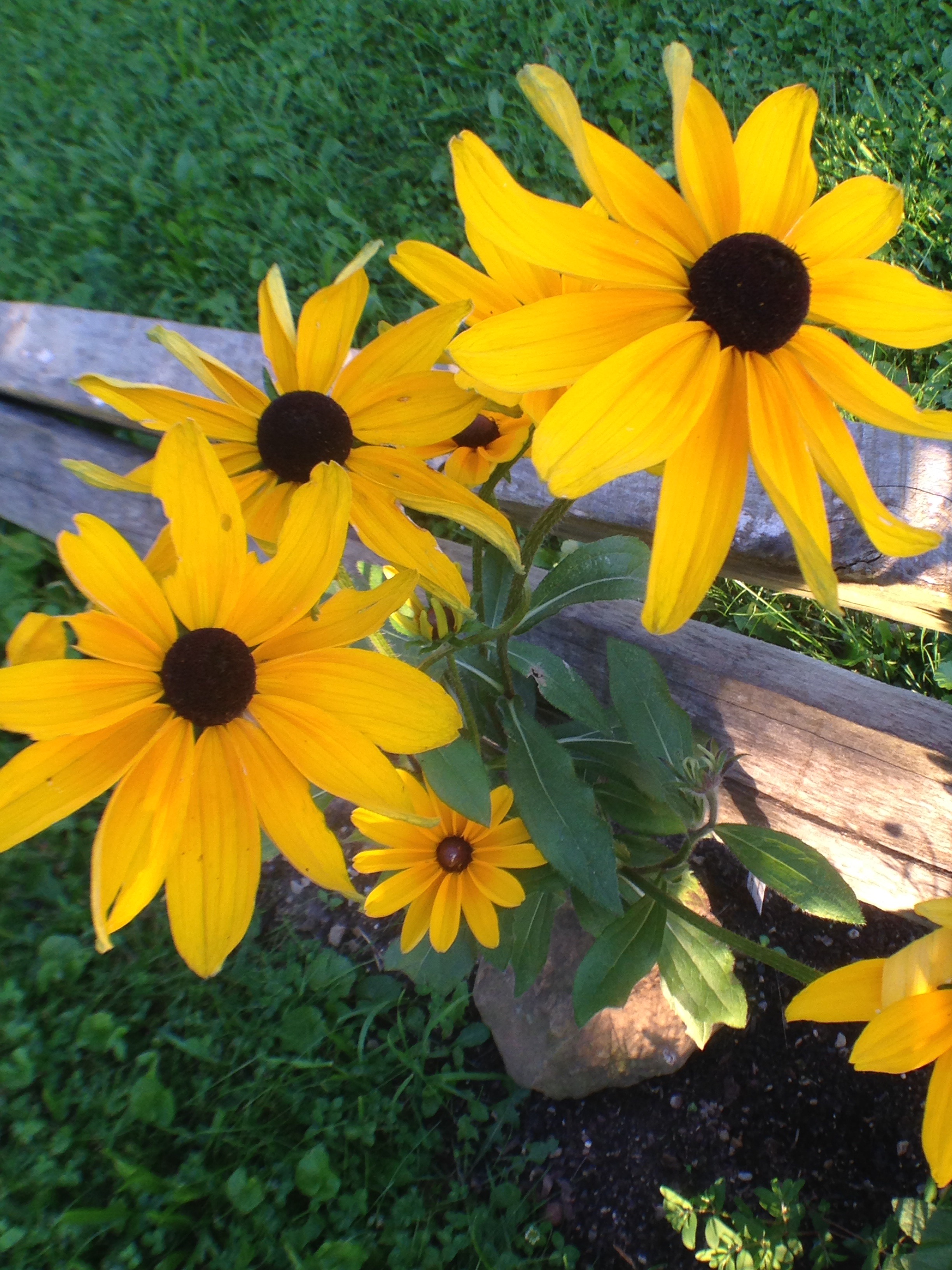 I take so much pleasure from this small triangle of color out my window. Only easy-grow flowers that are on the Deer Don’t Like Me list are planted there; though a rabbit chewed on the coneflower leaves last night. 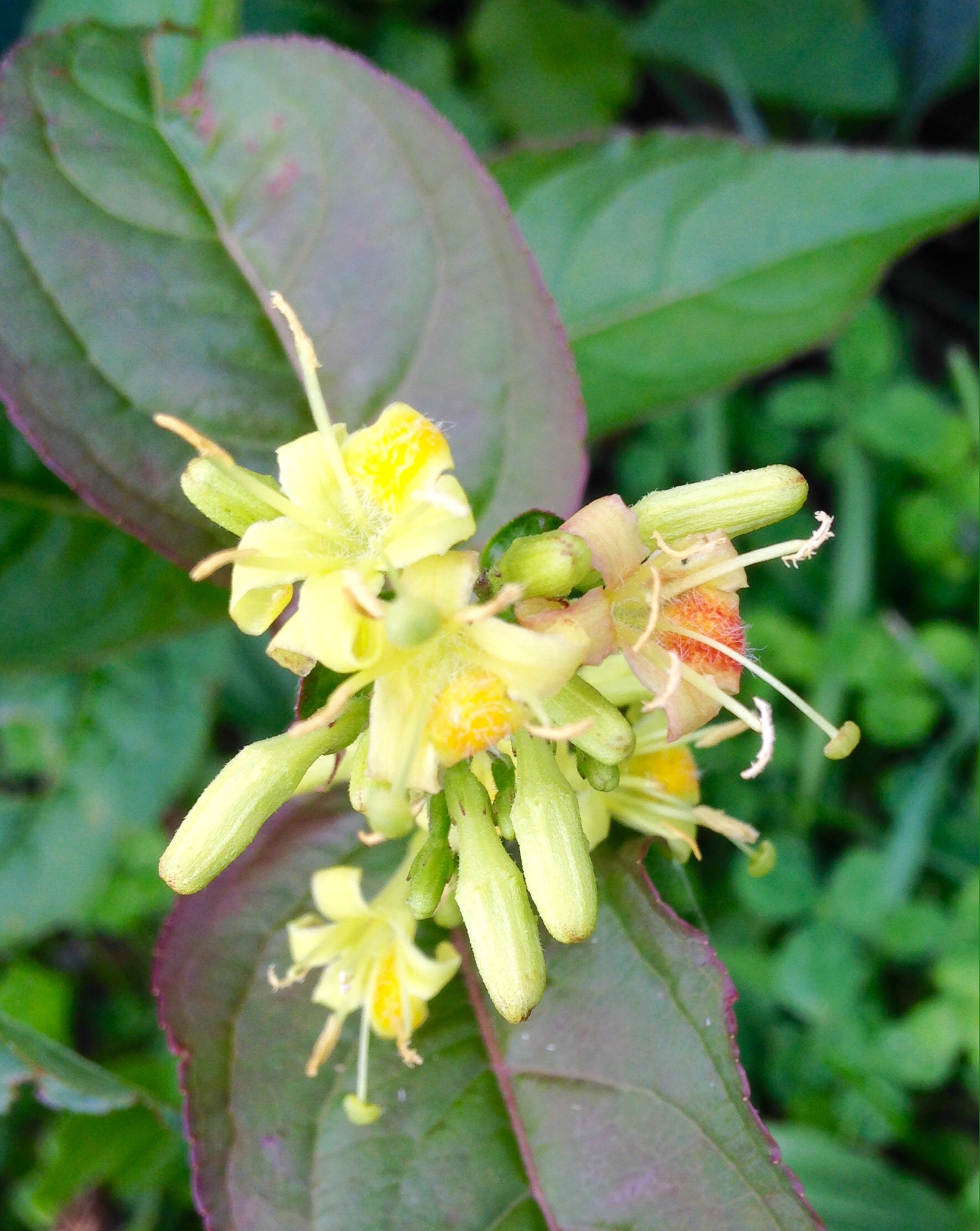 I’ve been keeping blood meal around the flowers to keep the critters out; perhaps that’s why they are so happy. Or it could be all the rain. The flowers love it; the vegetables do not. That’s why I am writing about the flowers instead of the sad unripe tomatoes; or the peppers with no blossoms and no fruit; or the squash with lots of blossoms but no fruit. Sigh.

The flowers are splendid though, and they cheer my heart when I start to whine about the vegetable garden.

And, this year we have pears! More about that in two weeks or so…

(You will note that the sky in this photo is not blue. Blue skies have been few and far between this summer.)

Just in case you would like to see my “Deer Don’t Like Me” list of deer-resistant plants, shrubs, and flowers, here is the one I’ve compiled: 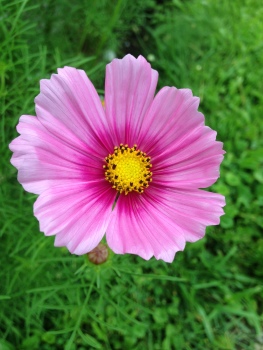 the beautiful Cosmos bipinnatus…you can never grow too many.

And the cheerful volunteer daisies, genus and species unknown…

But every list will add the disclaimer –Nothing is completely deer proof. Holly is on most every list of plants that deer won’t eat; yet the deer ate my two holly bushes down to almost nothing last winter — and we had a mild winter with almost no snow cover. 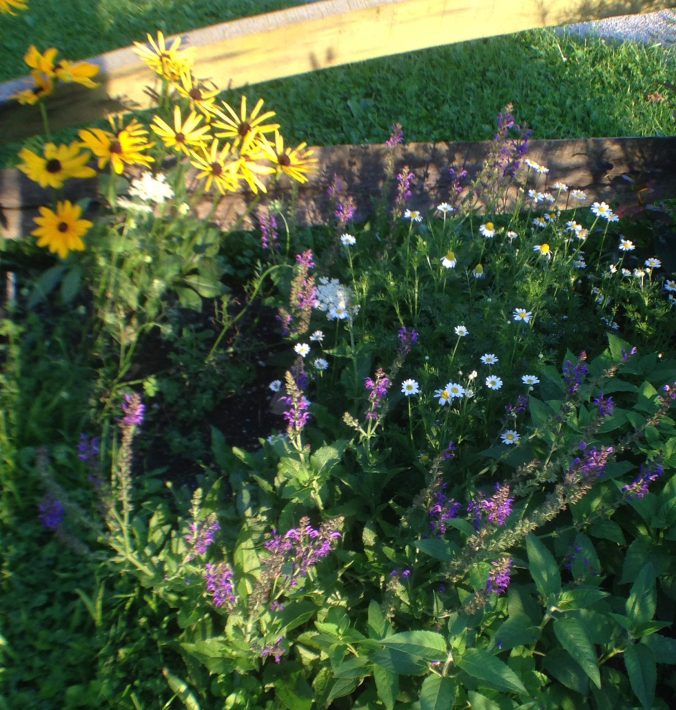 Gardeners around Western Pennsylvania are hoping for a sunny August…