It’s hard to start writing a brand new blog when it’s, well, brand new. I’m brand new at it also, which makes it doubly hard. But Apple Hill Cottage has come into our lives. It is a cottage with history — combined history for both Michael and me — and I want to write about it — document it — as we try to respectfully honor those who lived in it before, as well as making it our own.

Originally built as a little bungalow in the  thirties by my grandfather (we called him Pa), it was a place “out on the farm”, which later became his apple orchard, Longanecker’s Fruit Farm. Pa added an indoor bathroom when the orchard became successful, and someone needed to live there to help run the orchard and sell the apples. Later on a back bedroom was added and a partial basement under the bedroom. Oh and a garage. “Growed like Topsy” my dad said.

My grandmother’s brother, Leslie, his wife Mary, and their son Bob lived there from sometime in the fifties until 1974 when Pa sold the orchard. I remember being there many times as a kid–we spent time at the apple orchard “helping”. Pa always paid us: fifty cents, a dollar, sometimes two dollars if we really had helped! 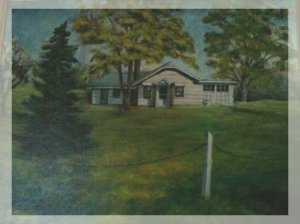 This is what the house looked like when Uncle Leslie and Aunt Mary lived there, and how I remember it as a kid.

We spent time in the big barn grading apples, taking the apples to the cider mill, and then helping store the jugs of cider in the little barn, which was refrigerated. There’s a picture of me with Pa in front of the apples for sale on the stand that was built around an oak tree. (I’m looking for it…) Occasionally we had family picnics in the front yard.

My Dad (1921-2012) said he first met all of Mom’s extended family at a family picnic here, but he couldn’t remember whether it was before they were married — September 18, 1949 — or after. While looking through old photos for Dad’s funeral, we came across this one, which was taken at the cottage. I like to think it was taken that day of the family picnic.

In 1974, Pa was 82 years old and wanted to retire from the orchard business, so he sold the apple farm to Joe and Clara and their partner, a local attorney. Joe and Clara’s son, Michael, was a senior in college and helped them do various remodeling projects. One of the projects that he has confessed to helping with was wallpapering the living room. It pains me to say we didn’t take a picture of the wall paper before we stripped it off — one of the first things we did — but I’ve found a picture of the wallpaper in the background. It was ORANGE. Seventies Peter Max Orange. And I’m told it’s back in style, but …you decide. 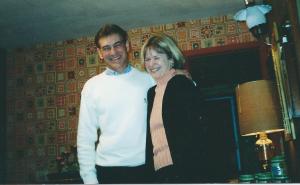 We are in Clara’s living room just after we got married in 2002. The wallpaper was on most every wall, and even on the ceiling in the section of the living room not pictured here. Michael said putting that wallpaper up caused him to be color blind.

I remember thinking it was a bit strange when Mom told me that Pa had sold the orchard to Joe and Clara. Michael and I had dated in high school for two years and had a tortured break up when we were freshmen in college. But in 1974 I was only 22 and not ready to go back to run an apple orchard that I knew nothing about. I do remember wishing I was a bit older and wiser and ready to take it on…

Joe and Clara remodeled the cottage in the seventies style. They turned the garage into the “garage bedroom” and put the ubiquitous paneling on the walls. They replaced a lot of the windows, but not all, and installed 5 (count’em–5!) sets of sliding glass doors — one at every entrance! When we took out the carpeting in the garage bedroom (orange shag) we found they had dated the underneath of the step down into the room. It said, “Joe and Clara started remodeling. March 1, 1974.” We added our names next to theirs —  “Michael and Carol started remodeling, August 11, 2011.”

They also built a wonderful, huge deck at the back of the house, which we are reaping the benefits of now.

It looks out over the hills of Greene County. To the left is the little barn where cider was stored. Now our neighbor stores his tractor there. There are wild cherries, oaks, maples, hickories, walnuts, catalpas, and honeysuckle. The birds sing all day. We have a family of bluebirds! I haven’t seen bluebirds since the last time I lived in the country! The binoculars just stay on the porch and the bird book sits nearby on the porch swing. It’s peaceful and serene for these two folks who’ve lived in the city for ten years. The porch looks east and there’s nothing better in the early morning than sitting on the swing drinking coffee and reading Jesus Calling. Yes, I can hear creation singing.

Not just breakfast coffee, but every meal…

Joe and Clara also enclosed the Oak Tree Apple Stand in cedar shakes that matched the house and painted the inside turquoise. It was the seventies, after all… They used it as a garage and also as a permanent garage sale where Clara sold her treasures. They called it the Gazebo; it will have its own post later on. Since Joe died in 1995, it has fallen on hard times. Every once in awhile one of us will come up with an idea for it, but so far it is just storage for carpet, tile, and a couple of unfinished kitchen cabinets. Sister Diane (interior designer that she is) suggested a guest house. Friend Rick was more down to earth — “This is just what Michael needs to store his junk,” he said. Yes, we’ll talk about that later, too…

As Clara got older she couldn’t manage living in the country anymore, and the house sat vacant for several years. Her good neighbors kept an eye on the place and mowed the grass. When it seemed obvious last year that she would never go back to the house, Michael and his sister Rita put the house up for auction. It was to be auctioned on July 12th, but first it had to be cleaned out. A dumpster was rented and almost everything was cleaned out or sent to the auctioneer — including all her Fiesta ware. I will forever be sad about that…

Clara died on Friday night, July 8th. On Saturday morning Michael and I sat up in bed, looked at each other, and simultaneously said, “We don’t have to sell the house anymore…” We called the auctioneer and cancelled the auction; Michael had to write him a check for $5200 (that was a hard check to write…) but all in all, it was a small price to pay for a house with such a story. We buried Clara on the day that the auction was supposed to take place.

I think she is smiling.

6 thoughts on “1. The Story of Apple Hill Cottage”