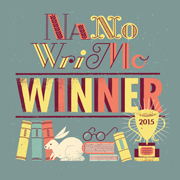 I started with 7 chapters written, which I did not use in my word count. The few days before Nov. 1, instead of writing another chapter, I wrote an outline. This was genius, if I do say so myself. I also did a vague timeline, which was less helpful, but I still did refer to it and adapt it as I wrote.

So, I won’t bore you with more words. I’ve got to get back to my novel, because IT STILL ISN’T FINISHED.

And it feels good.

No, that’s  bad, because I’m still not done.

Now if you’ll excuse me, I have laundry to do…

Follow the circle of life on WordPress.com
Join 3,367 other followers