Before a few weeks ago, I had flown once in my life. Well, twice if you don’t count it as a round trip. And that was a LONG time ago…

It’s not that I was afraid to fly. I just like to drive. Or be with people that I know very well who are driving. Road trips make me happy. It makes me feel like I have really, really travelled to get where I’m going.

And I’ve been on road trips to lots of places — I’ve been to the tip of Nova Scotia to San Diego; from Ashland,Wisconsin to Juarez, Mexico; from Boston to Santa Fe — and because I’ve been in a car, in between I’ve seen Chicago, St. Louis, San Antonio, Big Bend, Boulder, New Orleans, Nashville, Madison… I’d always rather drive, thank you very much.

But then, my daughter moved 2,590 miles away to California.

Google Maps tells me it takes 36 hours to get there by car and that is driving straight through, no stops. 38 hours with traffic.

And maybe in some future life, I’ll be retired with extra time; for now though, we had to fly.

We were leaving Chicago at 8:30 am and flying nonstop to Oakland, landing at 11:15. Supposedly.

At about 7:45 the announcement was made. Flight 1350 to Oakland California was delayed. We wouldn’t be leaving until noon at the earliest. It was a mechanical problem: not anything one could glibly say “Eh, just fix it and let’s get going, shall we?”

So we sat around. And sat around some more. I vaguely wondered if I should be up at the ticket counter with everyone else, jockeying for another flight, another city, another time? 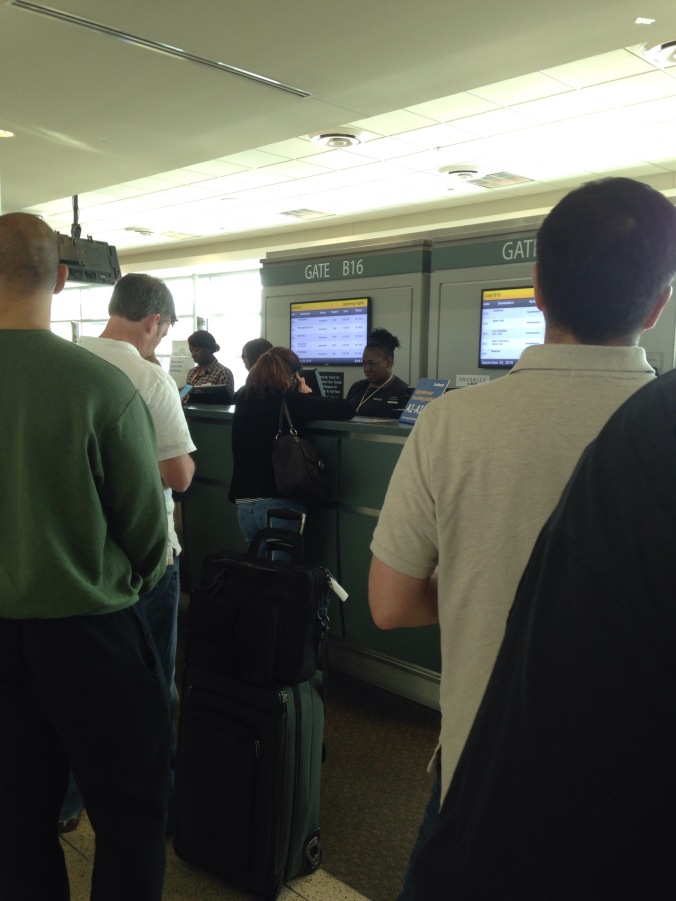 The people at the desk never lost their cool and were ever so pleasant; they gave us each $100 off our next flight.

By the time we finally got on a plane–our original plane from DesMoines never was repaired; they just found us a new one somehow– it was 12:30 pm.

Our pilot apologized and added this caveat: “Our flight time is regularly 4 hours, but we’re going to get you there in two hours. Enjoy your flight.” I think he was trying to confuse us about time zones and real air time — but we did get there around 2:30 with our baggage on the right plane.

I must say the takeoff over Midway Airport in Chicago is disconcerting. People’s houses are right there and very close.

I must say the landing over Oakland Airport is disconcerting. From the little window over the wing, all one sees is water coming up very fast. I was hoping for land to appear soon. 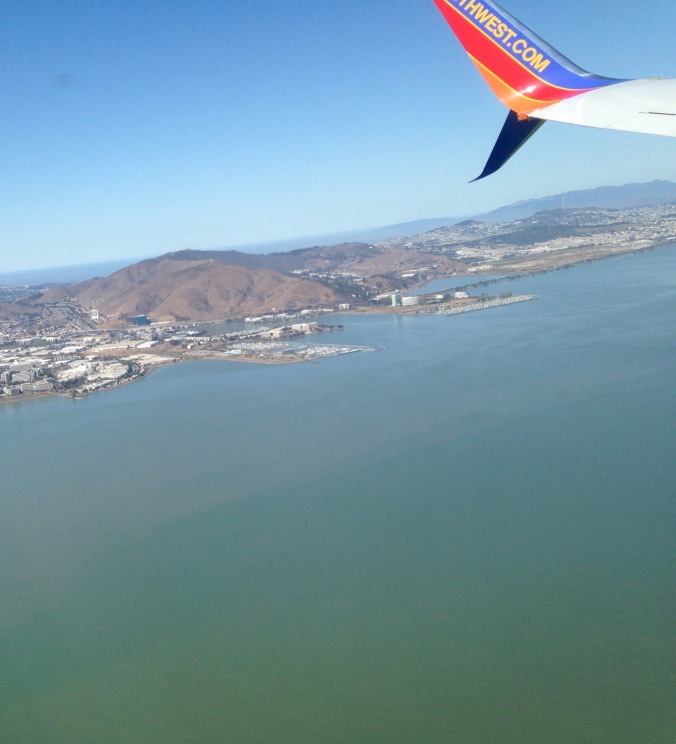 But in between taking off and landing, it was breathtaking.

Looking down at the real topographical map of this country, watching cloud shadows, brown squares and green circles dissected by curving roads and rivers, Rocky Mountains, high desert, green mountain lakes — Mr. H. C. said I was like a kid with my nose pressed against the window the whole time. 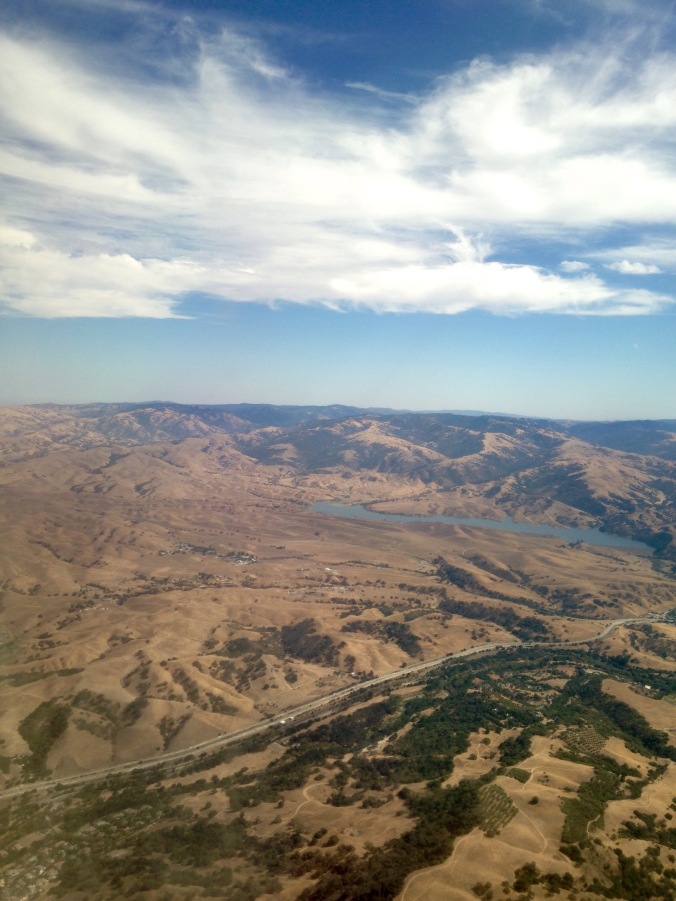 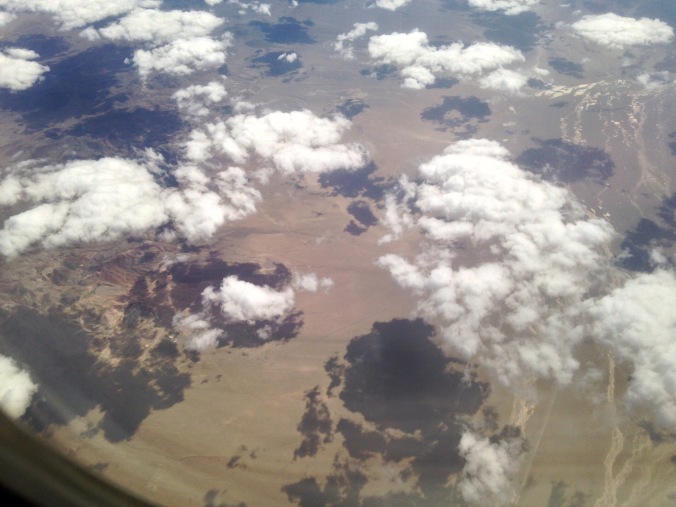 Words scribbled on my phone tried to capture the awe I was feeling; photos taken with my phone were just as unsuccessful as the words.

Passengers mostly seemed unimpressed by the view out their windows. Unaware and unconcerned that we were hurtling through the clouds in a metal cylinder (albeit a brightly painted one), they were busy eating, napping, laughing, reading, laptopping…

Yes I know it was all new to me. And everyone else on the plane probably flies twice a month and finds it all boring. But it wasn’t. It was some of the most amazing landscape scenery I’ve ever seen. 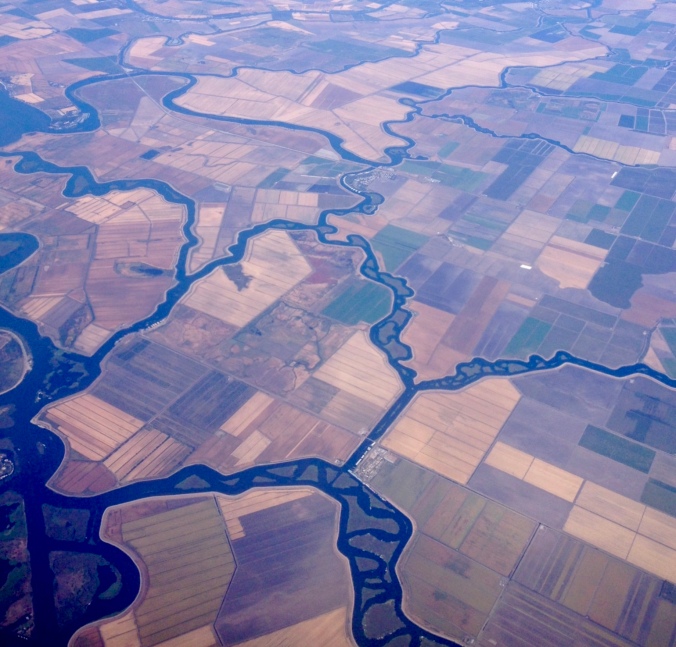 It’s good to shake up those road trips every now and then.

And so I’m shaking up this road trip that I’ve been on for awhile. I’m taking a break from blogging in November to participate in NaNoWriMo. Don’t know how far I’ll get, but flying is definitely faster than driving…