In a post a few weeks ago, I waxed poetic about the blooming catalpa tree in the side yard. And I said, “Birds and bees love her”.

This year there were no bees buzzing around the catalpa blossoms.

I know because the hammock is hung on the lowest branch of the giant catalpa tree, and this year, the only hammock hazard was from falling catalpa blossoms. There was no potential problem of a bee sting, because there were no bees.

In a beginning backyard fruit tree orchard, this is not good.

In an effort to see if the bees have really disappeared, we stopped mowing the back yard and let the clover bloom. There actually seems to be more clover in the back yard than grass — perhaps a leftover from when clover was routinely sown between the older apple trees.

Over a period of a week, we saw about ten honey bees in the clover (and five rabbits, ten deer, and a groundhog). 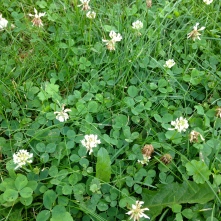 This has become such a worry that Mr. H.C. has actually suggested we buy a hive of bees for next spring.

We’re thinking of buying the hive, the bees, and some supplies, and asking a friend to take care of it the first year, while he is mentoring us. This is quite a step for Mr. H.C. — he actively dislikes bees — though neither of us is allergic to their stings.

It has become a national anxiety about bees. You can read about the issue here and here and here. No one will say exactly what the problem is, but to me, a non-scientific, tree-hugging, crunchy, suspicious-of-all-big-corporations type of person, it is obvious. Pesticides.

It’s called Colony Collapse Disorder (CCD for short) and since 2004-2005 beekeepers have reported a loss of bees in their hives from 35 to 90%. What is most mysterious is that rather than finding dead bees around the hive, the bees just disappear. And once I started reading about it, there are several dozen reasons/theories/government plots for the disappearance of the bees. (To be fair, there is a wide range of opinion –some people doubt if the bees are really disappearing and some people think the bees are being abducted by aliens….)

But if you want to be concerned about this issue, consider these points (that are all taken from the above articles.)

So come next spring, we may look like aliens ourselves. But we won’t be abducting bees; we’ll be helping to pollinate catalpa trees.

And apples and peaches,

and cherries and beans,

and pumpkins and peas…