Last year there was not a single walnut on our tree. We are down to our last bowl of walnuts. 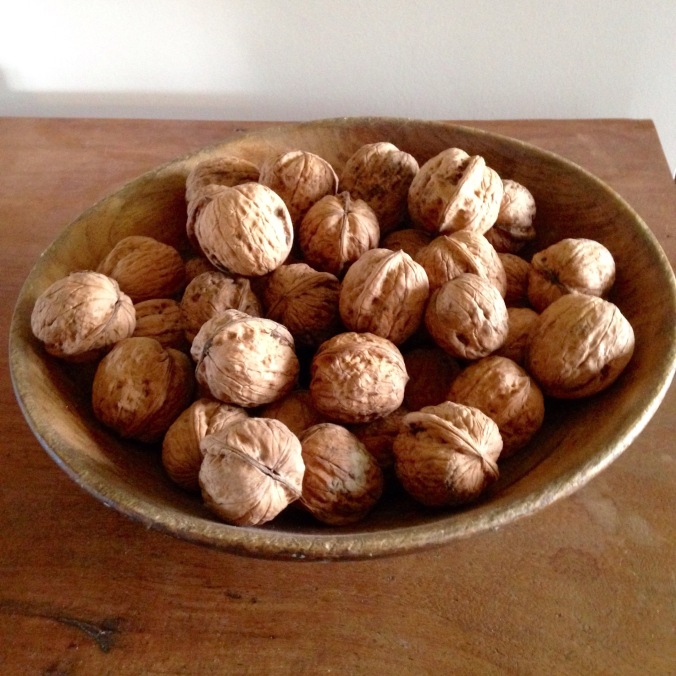 After two years of abundant harvests, it was quite disappointing. It had been so nice to look at the bags of walnuts in the grocery store, nod, and think, Yes! I don’t have to pay those prices. And mine are organic.

The unproven theory — put forth by our neighbor — was that a late freeze killed all the buds, but the first-year-peach tree had five delicious peaches on it, and the two trees are within a hundred feet of each other. Seems like a killer frost would have killed those peach buds too.

We’re only beginner backyard orchardists, so we have no answers, but we are checking on that walnut tree every day for signs of blossoms and keeping tabs on the temperature at night. 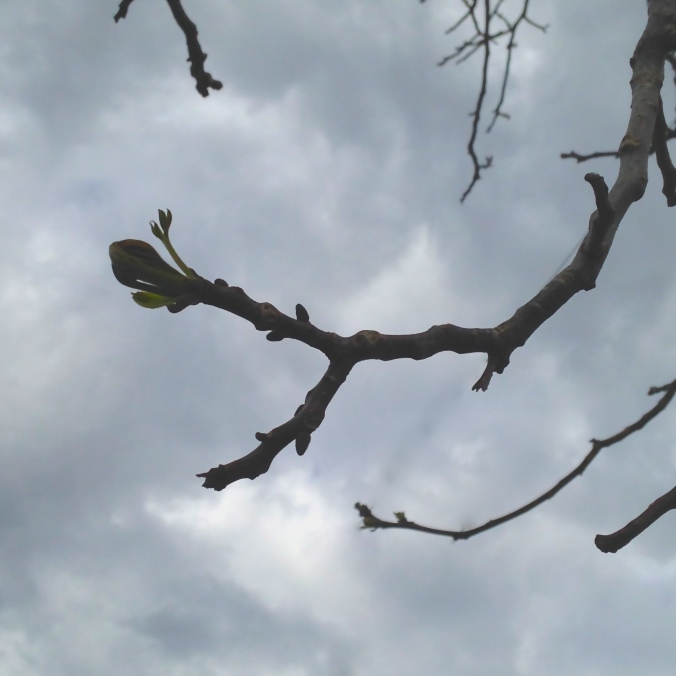 English Walnut trees — also called Persian Walnuts or Carpathian Walnuts (Juglans regia) are not native to Southwestern Pennsylvania, so it isn’t surprising that the harvests might be sporadic. They are commercially grown in this country in California, Oregon, and Washington, and PA’s climate is very dissimilar! Native to Southwestern Asia and Southeastern Europe, every site on the internet assures me that they are cold tolerant to thirty below zero. (It didn’t get that cold this past February, thank goodness.) 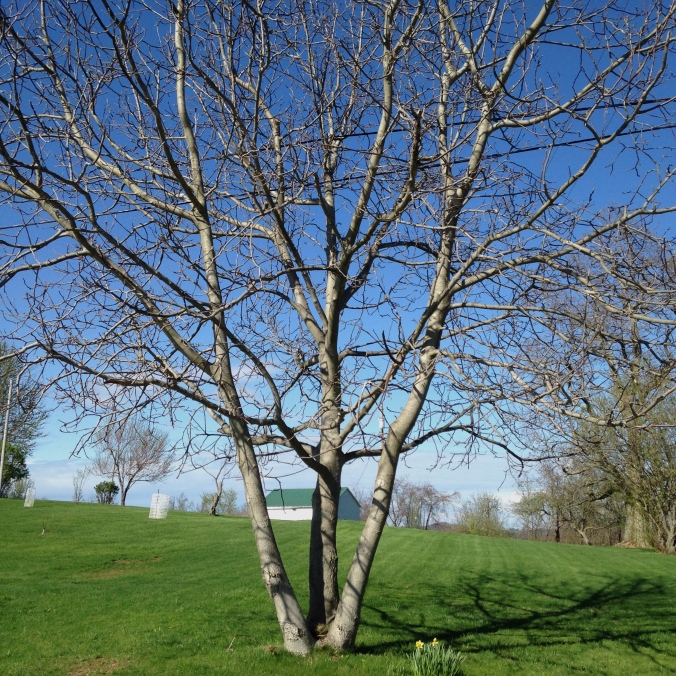 But some optimistic soul planted it, and it’s doing well here in USDA Zone 6A, with abundant harvests two out of the last three years.

The Penn State Extension web site tells me that Juglans regia does not self-pollinate and two varieties are necessary to get nuts. Hmmm. I wonder where those bumper crops came from? We do have several native black walnuts (Juglans nigra) down over the hill in the woods. Perhaps theory two is that the factors for pollination were just not right last year. That same website gives the requirements for pollination: the temperature has to be between 60 and 85 degrees, not windy, not rainy, and not much else blooming. No wonder there weren’t any walnuts last year — it is always windy up here on Apple Hill, and it rains a good bit, too. Today, April 22, it poured rain this morning, the sun is shining now, and it is 44 degrees at 2:00 pm. Not ideal for pollination. 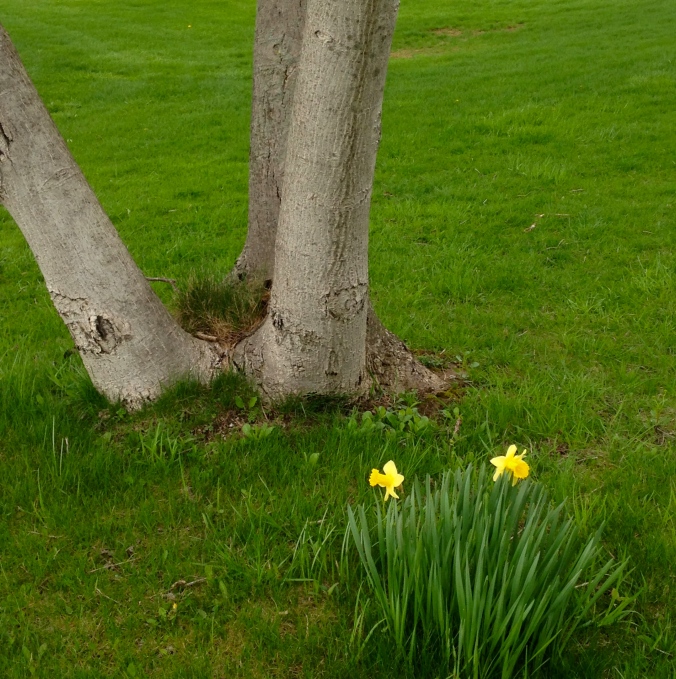 Another site on the Internet tells me that plants don’t like to grow under walnut trees because of a substance they emit called juglone, which is a natural herbicide. These daffodils don’t seem to mind.  And note the grass growing in the middle of the three trunks.

Theory three of the “no nuts last year phenomena” is the seven year cycle of productivity. I might be more inclined to accept this one if there had been just a few walnuts; however, the fact that there was not one nut, nothing, nada, makes me question that theory.

But when I googled seven year cycle of fruit, I got some very interesting results: the story of the seven year cycle ordained by God in Leviticus 25:1-7 — that the land should lay fallow the seventh year — like the weekly Sabbath, the seventh year (or Shemitah year) would be a time of rest for the land and for the agricultural society. They wouldn’t plant; they wouldn’t harvest; the land would lay fallow. Instead, God would provide food miraculously for the people, as He provided manna and meat for them in the desert.

Now, I don’t think that we need to follow the Levitical rules that God laid down for the Hebrews in the Old Testament, but I do believe that God gave humankind those rules for a reason. Does the land need to rest? Absolutely.

Do we need Sabbath rest? Absolutely.

Does the walnut tree need to rest? Hmmm….

If you’ve followed this rabbit trail of a post this far, you should be rewarded. So though I can’t actually make it for you, I will tell you it’s one of the easiest, best treats ever; you can have it on your plate with a warm mug of tea in under an hour. And it’s heavy on my two favorite ingredients: apples and walnuts. How can you go wrong? 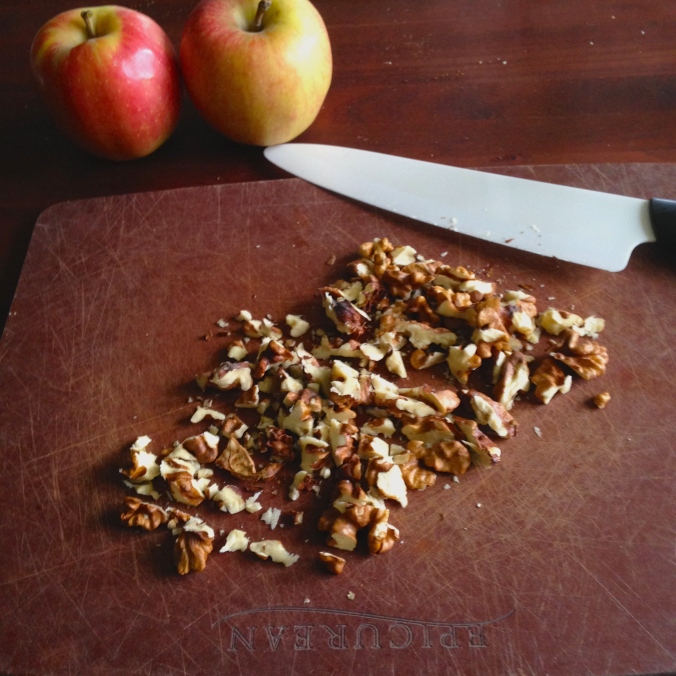 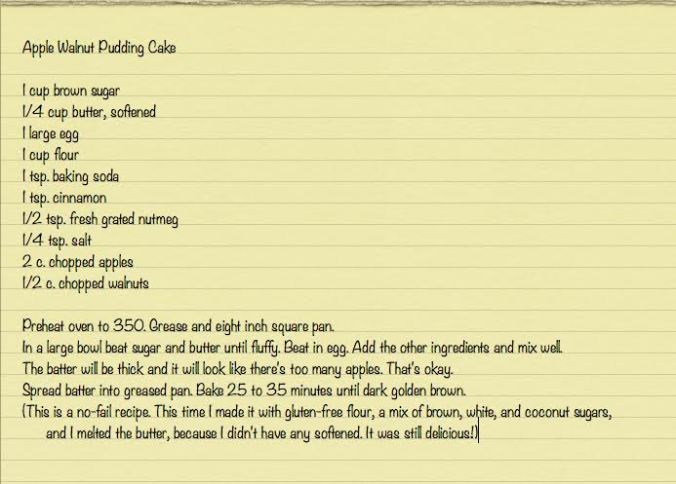 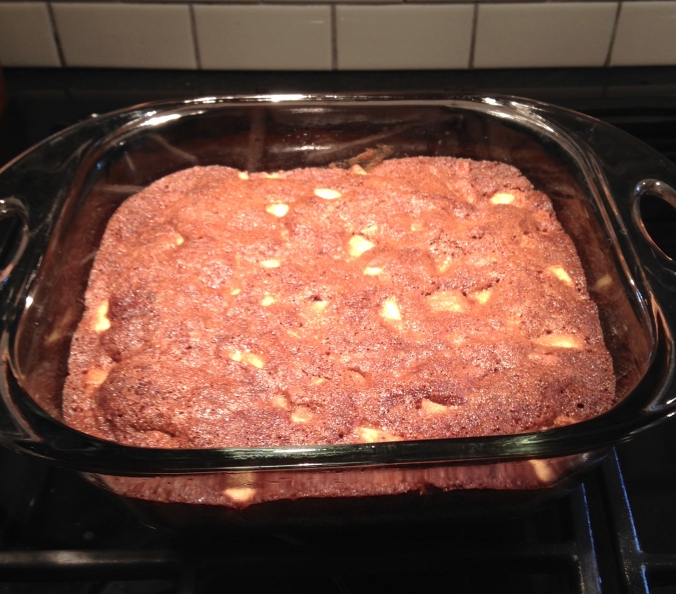 And what better way to use that last bowl of walnuts?