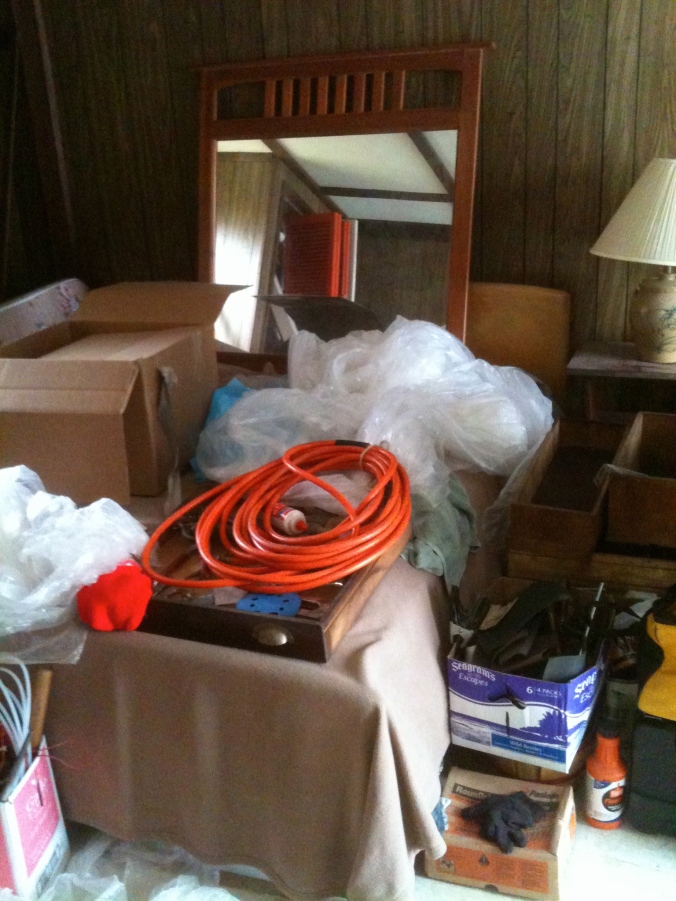 Mr. H.C. takes exception to this photo. He says to tell you all, dear readers, that this is the junk room at the cottage that we have not yet worked on. It’s where we put everything that isn’t being needed at the moment. Just until last week the kitchen cabinets were all in here too. It is NOT our bedroom…

Have you heard that song? The lyrics stick in my brain these days and I hum it often –even sing out sometimes — when no one is listening! Delbert McClinton, John Prine, and Lyle Lovett sing “It’ll weigh you down, foolin’ with too much stuff.” You can listen to it here in this you tube video.

When we move to Apple Hill Cottage in the sometime future, we are downsizing from a house with 6 rooms, 2 baths, 2 porches, a large 3-room basement, and a garage. It’s not a big house, believe me, but the cottage has 4 rooms, one bath, and a smallish 2-room basement. The gazebo (See post 13. A Lotta Big Trees ) could be used as a garage, and there’s also a huge back wrap-around porch, but NO extra stuff is going to be stored there! There’s also sort of a workshop/tractor storage space for Mr. H.C., but he doesn’t think it’s big enough. No. It isn’t big enough because he has LOTS of TOOLS. Did I say downsizing already?

Did I mention I happen to like my antique dressers? And I like my sweaters too… But, as usual, I am a bundle of contradictions. I love simplicity. I WANT my life to be simple. I have only owned one bumper sticker in my life and it said, “The Best Things in Life Are Not Things.” I don’t go to malls; I try not to shop; yet I acquire stuff I don’t want anyway. How does this happen? 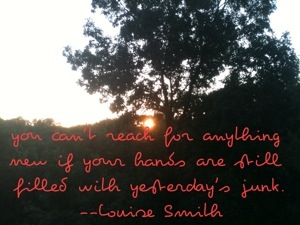 The chorus in that song above is also worth repeating: “Well you can pile it high, but you’ll never be satisfied…” Right! There’s always the perfect something waiting around the corner — and if you don’t know that you need it, someone will surely convince you that you do…

Just the other day in the Wall Street Journal was an article about people acquiring material goods and then regretting it — “A Closet Filled with Regrets.” One could be an emotional shopper, a sales shopper, a wishful thinking shopper… but nowhere in the article did it suggest we should actually cut down on shopping. But then, it was the Wall Street Journal! There was one statistic, though, that should give us all pause — we wear 20% of the clothing we own.

Voluntary simplicity is a catch phrase these days, but I’m wondering if it will actually catch on. Our American society is just too materialism-driven; what would actually happen to the economy if we stopped buying stuff. I’m no economist (Economics was the only class I ever failed in my whole life…) but just thinking about it makes me shiver. Our economy encourages us to buy, to have — to buy and to have more and more. What if we just said — Enough. Stuff.

Our book group is reading and discussing Celebration of Discipline by Richard J. Foster. The chapter on Simplicity is jumbling around in my head, and combined with downsizing, (or thinking about downsizing…) yet also having to spend money to buy stuff for the kitchen we’re redoing? I am struggling with this! Guilty! Too Much Stuff. Not only me. Not only my husband. All of U.S. I know people who have so much stuff in their garage the car has to be parked on the street (not us — we’re good with this one!) I know people who have so much stuff that one whole bedroom upstairs always has the door shut (umm…I’m working on it!) I know people whose basement has so much stuff in it that no one is allowed in the basement but them (umm…working on that one too!) I know people whose dining room table is so filled with junk that they never eat there. This is especially prevalent around tax time. (Currently we’re good with this one, but we do have two tables to choose from, just in case!) Are you guilty yet?

So at our house we are both guilty, which makes it doubly hard. Whose stuff should get thrown out, given away, discarded, repurposed, recycled, or garage saled?  In the last week we have both made great strides–I have given two giant boxes of craft materials to our grandkids, and Mr. H.C. has donated his antique car (inherited from Uncle Charlie) to Make a Wish Foundation. But this is nothing compared to what we need to do. I’m thinking of having blog give-aways… Who would like a 76 piece set of Noritake China that Michael’s Uncle Kenny brought back from Japan? Oh wait, am I allowed to give away my husband’s stuff? 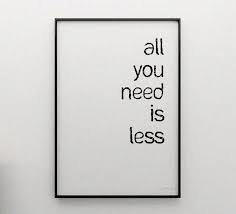 If you’ve read this far, you must feel the same as I do. I bought Real Simple magazine once, but how simple is it to have stacks of magazines around telling you how to live simply? Just last month I recycled 4 years of Cooking Light, finally realizing that No, I’m not ever going to go through them, cut out the recipes, and store them in a binder…

All sorts of people can get on this simplicity bandwagon: People who want to live in an ecologically friendlier way; Baby boomers or retirees who suddenly realize they have collected a lifetime of stuff and don’t want/need it anymore; People who want to downsize for any reason; and, Christians who want to take Jesus seriously when he speaks of trusting God to provide or sharing our wealth. So yes, I admit — I am in all four of those categories!

Richard Foster comes down hard on western culture. No, actually, he is Relentless. His words would make anyone squirm, and the thing is, many of his words are directly from the Bible. In fact, he says,

“the majority of Christians have never seriously wrestled with the problem of simplicity, conveniently ignoring Jesus’ many words on the subject. The reason is simple: this Discipline directly challenges our vested interests in an affluent life-style.”

So thinking that I need reminders, Mr. H. C. needs reminders, and probably all of you need reminders, here are some reminders from the chapter on simplicity that are worth repeating, remembering, and responding to. 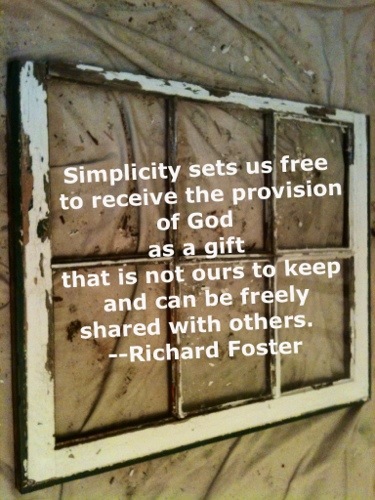 If we believe that all our stuff is from God and not of our own making or desiring, then we can share it more easily. Open hands are the outward evidence of an inner trust that God will provide us with what we need. Jesus promises us this in Matthew when he tells us to not be anxious and not to worry. That the birds of the air are clothed and fed, and aren’t we as loved by God as those little birds? (Matthew 6:19-34 ). Indeed, Foster says, “If what we have we receive as a gift, and if what we have is to be cared for by God, and if what we have is available to others, then we will possess freedom from anxiety…[and] freedom from anxiety is one of the inward evidences of seeking first the kingdom of God. The inward reality of simplicity involves a life of joyful unconcern for possessions. 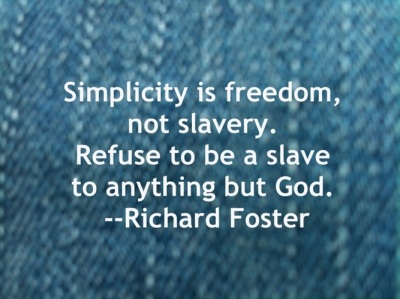 Most of us could get rid of half of our possessions without a struggle. Remember that 80% of our clothing that just hangs in our closets? So I don’t know about your stuff, but my stuff has to be moved, dusted, stored, and then moved again. What freedom it would be to not have so much — so right now I am starting — I am refusing to be a slave to stuff!

So how do we go about simplifying? Stay tuned. Mr. Foster gives us ten different practical ideas on how to go about simplifying our lives, and we will study them in the next post. :-) In the meantime you can check out these sites for a variety of takes on living simply:

6 thoughts on “61. A Short Treatise on the Accumulation of Material Goods; or, Too Much Stuff”