We were sitting around a conference table at church a few years ago – about 18 of us – trying to figure out when we could have our next meeting. It’s hard to find a time, an evening, when 18  busy adults can all get together. Someone suggested February 14.

“But that’s Valentine’s Day,” Someone Else said.

Somebody said, “Does anyone really celebrate Valentine’s Day?”

Two hands went up. Mine and my husband’s. I guess we were the Anyones.

Everyone laughed. “Oh, that’s because the two of you haven’t been married very long,” they said.

It seems to me the longer you’ve been together, the more you should celebrate a holiday devoted to love. So – I’m trying a recipe for my sweetie-with-the-sweet-tooth from this lovely cookbook. (And I think grandchildren will benefit as well…)

The Apple Lover’s Cookbook by Amy Traverso was given to me as a housewarming present by my friend Beth, who saw this cookbook and decided I ought to have it! Thank you Beth! I have only made one recipe from it so far — the Apple, Cheddar, and Caramelized Onion Pastry Puffs. They were delicious! I’ll give you that recipe later sometime; today we’re concentrating on the Salted Caramel Apples with Cinnamon Graham Cracker Crumbs. (If that isn’t making your mouth water, go make an apple pie instead.)

Before we get started, I will confess – my only foray into making salted caramels was a mixed bag. I followed the recipe exactly, and they tasted delicious; however, the caramel was too thick to be a caramel sauce, but not thick enough to be covered in chocolate, outside of a refrigerator. (But I gave them to my brother-in-law for Christmas anyway…) So, I’m not an expert, here. And I’ll show you my photos, success or failure…I promise.

8 Sweet-tart Organic Apples. (The wax that is on the supermarket variety can keep the caramel from sticking to the apple.) This cookbook is an amazing encyclopedia of apples as well as a cookbook, and she lists 19 apple varieties under sweet-tart, but the main ones you will find (unless you live in or near an orchard) are Granny Smith, Ida Red, Rome, Northern Spy, or Stayman Winesap. Our apples ran out before Christmas, so I’ve got Granny Smiths and Organic Galas from the local grocery store. Right. Galas aren’t on the list; there were no Ida Reds anywhere, so I went with what was there. It is February after all…Put them in the refrigerator for at least an hour before you need to coat them with the caramel. (Also read the note at the bottom of this post…)

Everything is pictured here except the heavy pot – I used my 5 qt. cast iron casserole pot – and the skewers. You’ll see them later.

Before you start, break up the cinnamon graham crackers in a baggie and crush them with a rolling pin. Or however you like to crush up graham crackers. I cheaped out and bought the most inexpensive ones I could find – the brand shall remain nameless – but they sure aren’t like the old Honey Maids I loved to eat with milk. The Honey Maid Cinnamon Crisps were $4.99! So I shook some extra cinnamon on the crumbs, because I don’t think it is ever possible to put too much cinnamon in anything. Also cover a baking pan with parchment/waxed paper and put both of these near the stove.

Melt the butter and add the sugar, corn syrup, all the milks and creams, and the salt. Adjust your burner to medium and don’t touch it during the whole process. Really. DON’T touch it. Patience! Stir gently until the mixture starts to boil.

Put the candy thermometer in the pan at this point. Keep your eye on the thermometer and stir gently every minute or so, but this part takes a while – maybe fifteen or twenty minutes. You want to get the temperature up to 238 degrees, or the soft ball stage. Stir it every once in awhile, but don’t lick the spoon! It’s like, boiling? Worse than burning your tongue on coffee or pizza! Instead, get your apples out of the refrigerator, wipe them off with a paper towel if they’re damp, and insert your sticks. I’m using recycled plastic skewers from an edible arrangement. I thought they would be fine, but since I’m writing this from hindsight, I think they may be a little bendy. 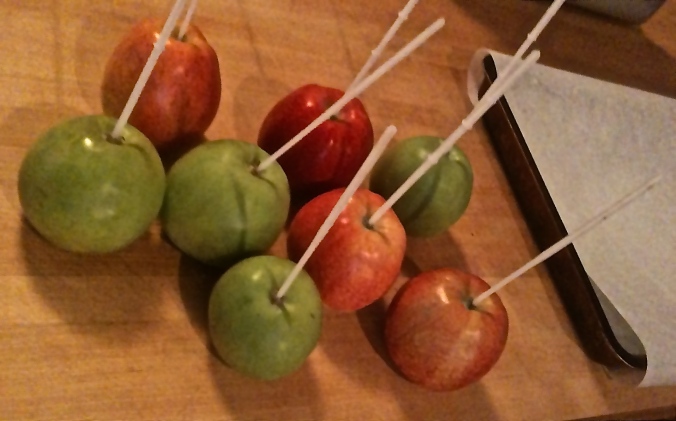 When the temperature gets to the soft ball stage, turn off the heat and stir in the vanilla. I actually let the temperature get up to 240 degrees; I didn’t want any runny caramel! It worked. When the caramel is getting to the right temperature, you can actually see it thickening up and changing texture in the pot. Roll the apple around in the caramel; hold it up, twirl it, make sure the entire apple is covered, and dip it in the cinnamon graham cracker crumbs. I think you could use chopped pecans instead, and it would be yummy. Put the apples on the parchment covered tray, and do another.

The hardest part is getting the whole apple coated – especially the top. You can tip the pan; you can use a spoon; but even so, I could only get 7 apples coated. I probably had enough left for the eighth but just couldn’t get it around the apple. So I did what any normal person would do – I poured out the last of the caramel, sliced up the apple, and ate it as is. Refrigerate the apples for two hours before you do anything else with them.

I wrapped mine in parchment paper and tied dark red bows around them. It was the closest I had to red ribbon. I’m going to add some hearts tomorrow, but for now, I’m done…
Except for this important note: The Granny Smiths I had were straight from Giant Eagle, and the wax on them was thick. In the recipe, Amy Traverso gives a technique for getting the wax off, and I would be remiss if I didn’t give it to you. Boil a pan of water, and using tongs, dip the apples in the water for 30 seconds or so. Then, with a paper towel, dry the apple and rub the wax off. It works! Ms. Traverso says this is not necessary if you have organic apples, so I did not do this technique with the Galas. If you look closely, you can tell the caramel didn’t stick as well to the red apples as it did to the Granny Smiths. My thought is that even store-bought organics have that food-grade wax on them.

If you notice the first apple at the bottom – that was the first one I did. I didn’t get the entire apple coated at the top, so I spooned some on later. That’s the one I ate. It was delicious! The apple was actually a little softer and juicier than normal; the next time I make these, I will use the boiling technique on all the apples.

The texture of this caramel is great. When I poured out the last bit, it hardened up without even being put in the fridge. It would be great to pour into a pan, let it harden, and then maybe melt some chocolate over it? I’ve got leftover ingredients calling out to me. The only thing better than caramel with apples is caramel with chocolate.

The taste of a fair in February…