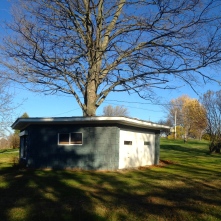 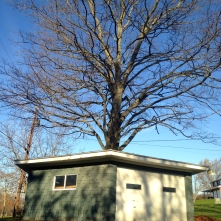 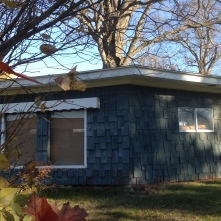 It’s a local landmark
in our front yard.

“Is that the building with the tree in the middle?”
they ask.

We nod and smile.

Only the old folks remember
it used to be a
fruit-stand. 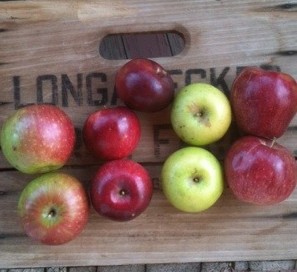 Breathe deep
Smell the sweet
Hear the shouts of sisters
jumping down the bleachers
between the baskets–
our feet zing
and echo
on the wooden boards.

The years transform
the echo
into the whine
of brine trucks
speeding up the road.

When did I get old? 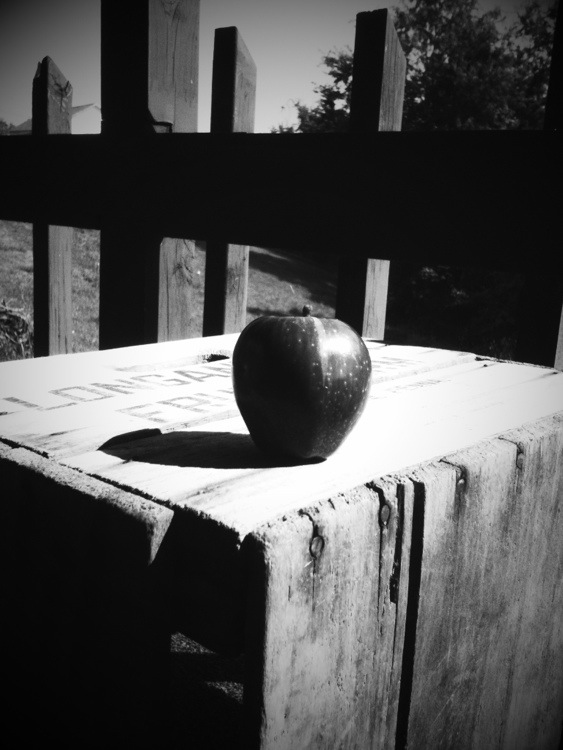 Last year I showed you photo after photo of beautiful apples that were all picked from our trees here on Apple Hill.

It was such an amazing surprise because we just didn’t expect such beautiful apples from totally neglected trees.

Turns out, maybe neglect was the answer.

This past winter, we pruned the trees.

This past spring, we fertilized the trees.

And this year, this is what our apples look like. 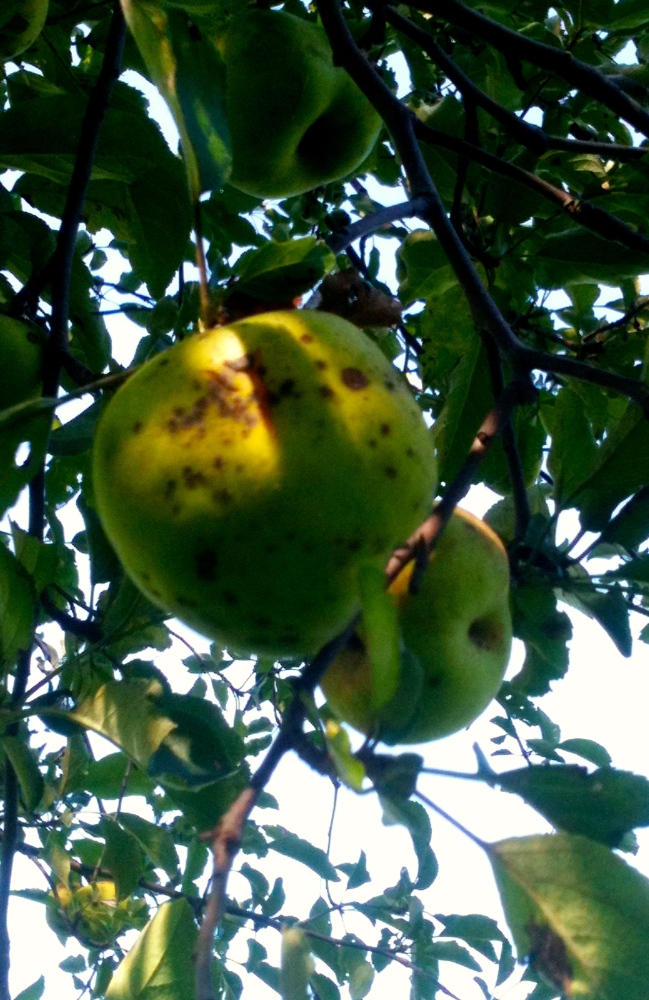 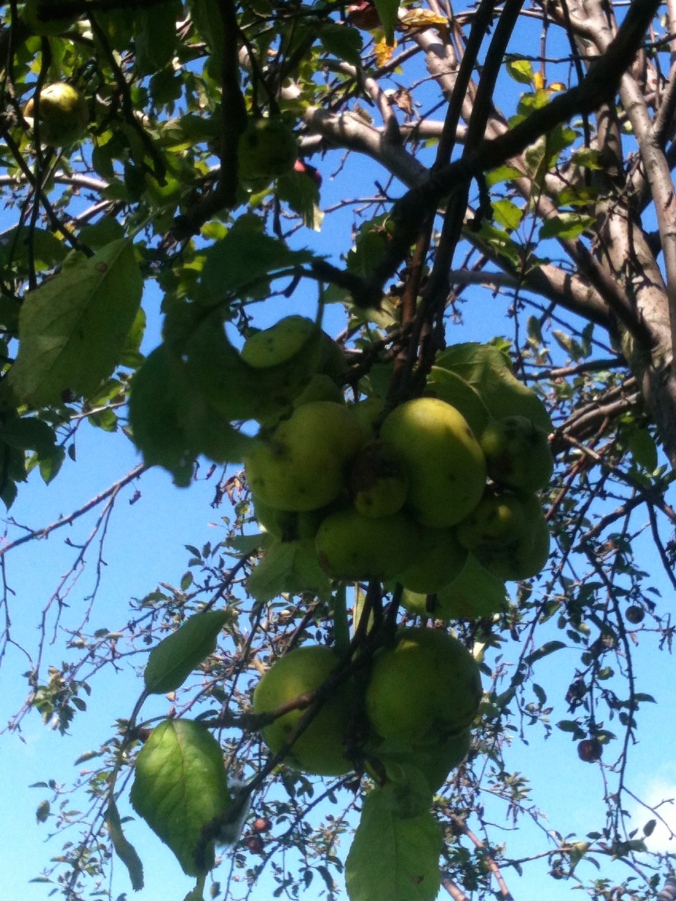 I have such a vivid picture in my mind of him saying this, that he must have said it frequently. Although, I would guess he was talking about the peaches. Peaches are much more finicky than apples. AND he sprayed his apples. (And lived to the ripe old age of 98, despite being constantly around chemical spray, DDT, and other toxic poisons of the fifties and sixties. Plus, he spread butter on his potato chips and used the salt shaker for every piece of food on his well-filled plate!)

Yes, we know about dormant oil spray…Maybe next year we’ll try it.

But this year, we’ll be buying our apples…

No, it’s not time to hire any laborers yet, but the two old trees in our side yard have picture perfect apples on them for a couple of old codgers (not us, the trees…). They are so close together that the red and the green apples mingle for a wonderfully random effect. 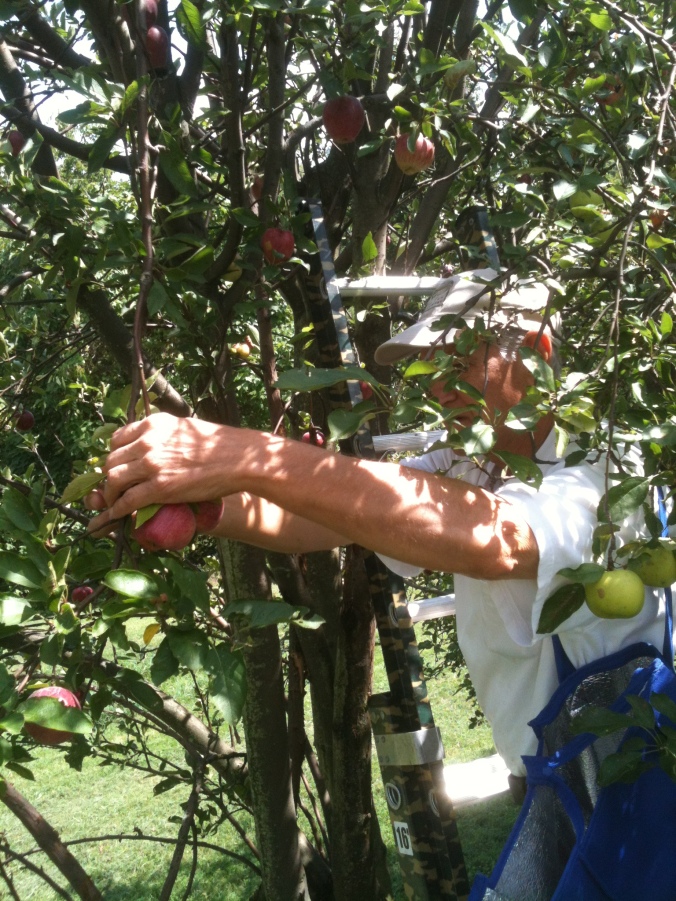 The most beautiful apples are always high above our heads. We got out the ladders!

They’re small, and a few have scabs, but there are surprisingly few worms! We can eat them whole (not the worms!) –always the sign of a good apple! Neighbor Betty reminded us that there are two other trees on the wild part of our property line (near Our neighbors, the cows) so we have to check them out this coming weekend. I’m hoping they are Macs–my all time favorite apple. Here is our harvest–not quite enough for a bushel basket, but there are still plenty of apples on the trees.

There are also four pears in here somewhere…

We are not the only ones who love these apples–you saw the deer a few posts ago–this week I finally got a photo of Gus, our elusive groundhog. He’s so deliriously happy while eating these apples that he forgets to run away when I get out my camera. He eats one under the trees, then picks one up and takes it down into the woods. For lunch? For a mate? 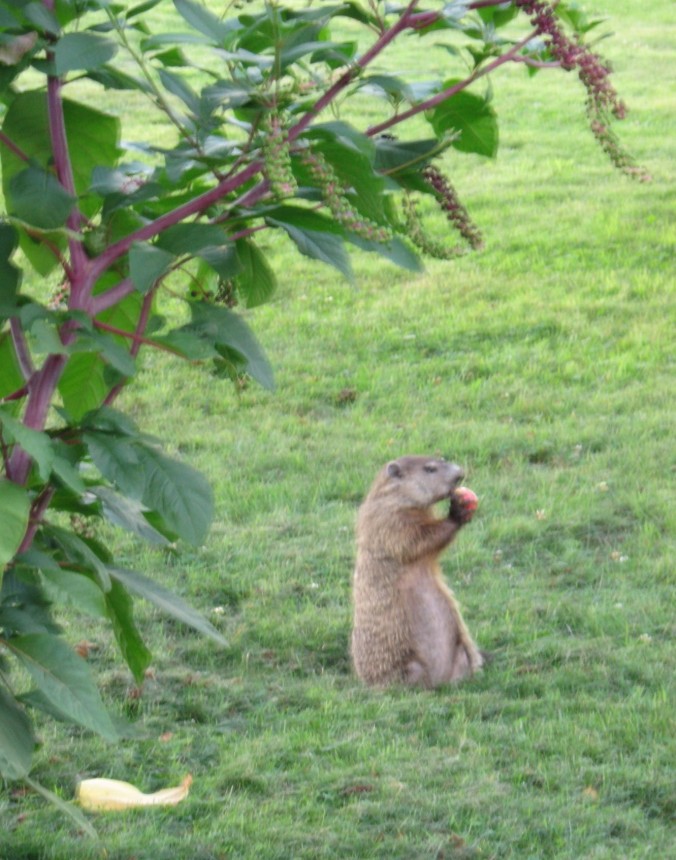 Gus eating an apple. This is the fifth shot–each time I got progressively closer and he (she?) was oblivious…

This behavior prompted much discussion, and we’ve decided that perhaps this critter’s name should really be Gusella (Gusette?), as we think her husband met an untimely demise. (Score Michael 1, Gus 0) Michael insists it was deserved because Gus was digging around the basement doors where the tractor is stored. We don’t want any groundhogs taking off on the tractor. I wish I could draw; I have this wonderful picture in my head of the groundhog driving off into the sunset on the tractor waving good-bye to Michael. At least we are taking care of his widow…

And this gentleman showed up again: 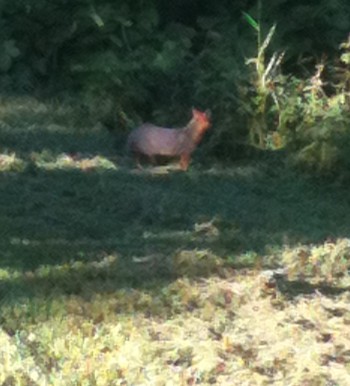 I took four shots of him, but this one is the best. I only had my IPhone camera with me on the porch and this is as zoomed as it gets. (After the fox appeared, we set up a tripod on the porch with Michael’s nice camera on it.) Before he got to the sunlight, he took a left into the woods. Mr. Fox was not interested in the apples; Michael had just mowed, and I think that’s what brought him into the field.

After we picked apples, work on the cottage was slow. Michael has finished putting up the light boxes in the attic, and we are almost ready to order the ceiling wainscot boards. In the meantime… 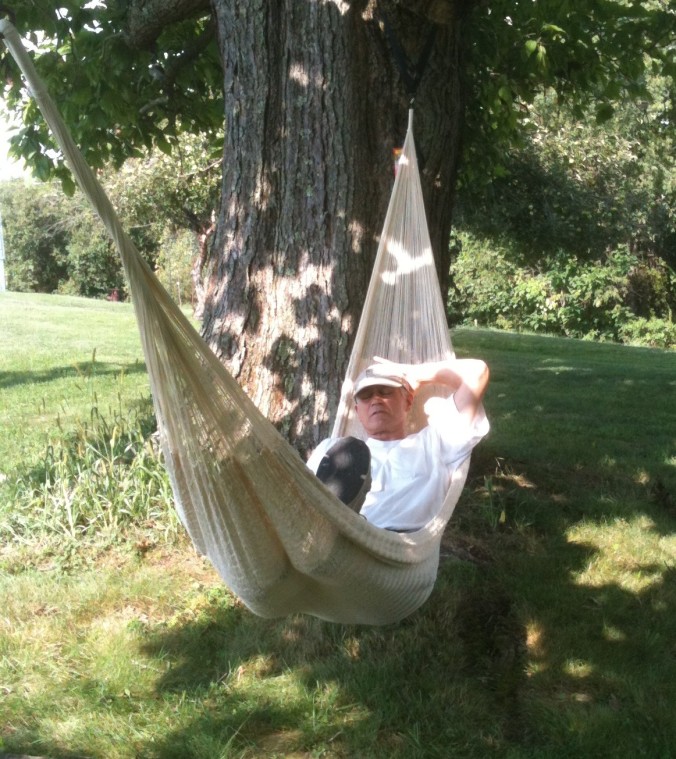 we’re trying to savor these last days of summer…You do the same!

Favorite Apple-icious books:
Down the Road by Alice Schertle

The Apple King by Francesca Bosca

The Apple Doll by Elise Kleven