Last summer my son-in-law brought me out two of his house plants to tend while he went home to Spain for a month. I was glad to tend the hydrangea; it was in a big pot and it could live outside on the porch next to mine. Mine was pink; his was blue. They would look lovely together, and I’m not afraid of hydrangeas.

The other was an orchid. I shook my head at that one. “Oh, I’ll kill that one for sure,” I said. “I’m not good with any plants that are tender or need a lot of care.”

“It’s okay,” he said. “Just give it three ice cubes a week. Or 1/4 cup of water. No direct sun, and if it doesn’t work, I’m not attached to it. Don’t worry.” Even though he said all that, I still didn’t want him come back to a dead orchid.

That was in July. It had one icy white bloom atop a long thin stem; it looked very fragile. The bloom dropped off within a couple of weeks and left the long green stem. It wasn’t very attractive, but I dutifully gave it a quarter cup of water every Sunday. I didn’t think ice cubes would be good for a tropical flower.

After he came back from Spain, he was in the process of moving and told me to just keep the plants. The orchid didn’t do much for two or three months, and I was starting to think it was silly to keep watering such an ugly plant. (There’s a lesson there in that sentence….) But it didn’t look unhealthy, so I kept watering it.

One morning I was moving all the plants and dusting the window sill when I saw odd looking growths coming from the base of the plant. They were silvery. I had no idea, but since something was happening, I did some basic research on Phalaenopsis Orchid. 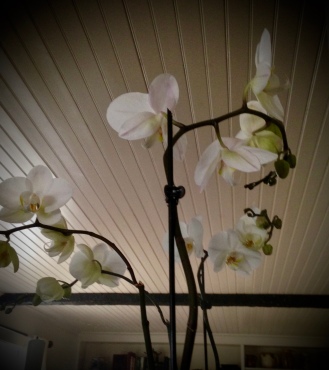 These were air roots. Of course. Every plant has air roots, right?

I did more research. There are about a hundred million web sites for novice orchid growers, and they don’t all agree. But the first web site I checked suggested cutting back the old flower spike. It may send out a new shoot, or it may not. Depends if it’s happy or not…

It didn’t seem unhappy, so I cut it back by half. Within days a little sprout appeared just above where it had been cut back. And within days of that little sprout, another shoot appeared, and this time it was growing out of the dirt. Er… it isn’t really dirt. It is magic orchid-growing chunks of pixie dust ‘media’.

Excitement mounted, and I went back to researching. It turns out that the 3-ice cubes per week is a Thing. More correctly, a company — Just Add Ice Orchids. Most of the spectacular flowering orchids that the big box stores are selling right now are orchids from this company. I have always just passed them right by, because I’m not really a fan of delicate hothouse flowers. Did I say that already?

With air roots and two flower spikes, I actually started to get excited and attached to it. I texted my son-in-law with a photo. He corrected me on its gender and called the orchid a she. Yes, it is plain from the photos, she is a lovely March bride. 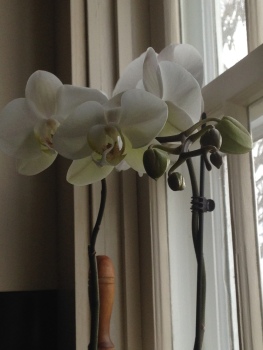 I began to use the ice cube method, since it has obviously been approved — not only approved, encouraged. Her flower spikes grew tall, and soon there were little bumps all along both of the spikes. Dare I think they would be flower buds? I counted them. There were seventeen!

Before you think that I am an absolute genius with tender hothouse orchids, I have a confession.

I struggle with lack of light in the months of November through February. (Does this mean that I myself might be similar to a tender hothouse plant?) So this winter I bought four JOYOUS lightbulbs — full spectrum light that mimics natural daylight. As I was choosing where to put them, I noticed in big print on the packaging (that’s the only kind I can read these days…) that these light bulbs can also be used as grow lights. So I put one of them in the schoolhouse light over the kitchen sink, so the houseplants on the window ledge could benefit from joyful light too.

I cannot say with full certainty this is why the orchid is so magnificent. Several of the websites I visited said that light does not affect the blooming of orchids. Can I say I don’t believe them? I must also say that this is the first year that my tender Rosemary plant still looks this healthy in early March. Usually it dies by mid-January.

I sent a text to Pedro the other day with a photo of how spectacular she is. I offered to give her back. He generously declined, saying, “She must love your window.”

And the hydrangea? The deer ate it to nubs one night last fall. I brought the container of small sticks inside and shoved it in a corner of the kitchen. Since spring is around the corner (What corner, Where?) it is starting to come back too. I’m hoping its lovely lavender bloom will take over when the last orchid blossom falls off.

So go for that spectacular orchid. If I can do it, you can too.

2 thoughts on “The Accidental Orchid”