Old enough that I don’t always like to check my age category, because it’s too far down on the list.

Old enough that my time left is precious, and I don’t want to spend it re-learning what I thought I already knew.

Old enough that I believed the lie that technology is supposed to make our lives easier and simpler.

Lately, I’ve been fighting technology, and it’s wearing me down… 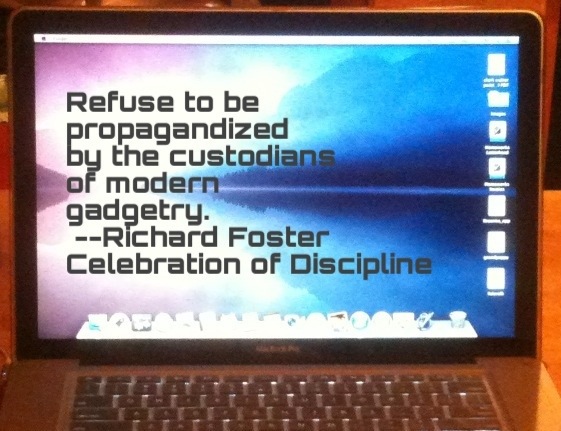 First there was Windows 10 on my office computer. Now I have to put in a password every ten minutes when the screen goes to sleep. (Is that why it’s called Windows 10?) Oh yes, I’ve set and reset the settings. Ten times at least. The screen is not supposed to go to sleep — ever. But there it is, every ten minutes it starts snoring. Does exactly what it wants. I think I’m going to start calling it HAL. (Proof that I’m old.)

Then there was the new iOS on my iPhone. Now the blue tooth in the car just circles around and around, and I can’t play the music that is on my phone. I used to be able to do this… And yes, I’ve uninstalled my phone and reinstalled it. Three times. Nothing. No music. I’ll have to go back to CD’s I guess.

Then there was El Capitan on the MAC. Yep, the wireless printer stopped working. This is actually one of the success stories, because after uninstalling and reinstalling the printer three times, it has finally started working again. But my new writing program Scrivener — advertised as El Capitan ready — has frozen repeatedly. It is frozen as I write this (which is why I’m doing a blog post instead of writing on my novel).

And then there is the WordPress update. For a year now, they’ve been telling me to switch to  the improved posting experience, but I’ve always been able to get around it. Because the old way of posting had commands right at my fingertips. Easy. Visible. But today I tried to get in the back way, and BAM, the new dashboard is the only one to be seen. I was beyond frustrated…

New and improved rarely means improved. It means frustrated and irritated, which quite frankly, I don’t need in my life. Is there anyone who does?

I’ve learned my lesson. I’ve turned off automatic updates. I’ll just have to put up with those annoying little numbers on the App Store. And those banners on the Mac that make me feel like I’m way behind the times? I’m blind to them.

I can take it.

(If you are a frustrated WordPress user, here’s the workaround, courtesy of  Life in the Realm of Fantasy. Go to My Stats; click on WP Admin; click on posts; and Voila — you are at your old familiar dashboard. Thank you, Connie!  NEWS: And just this morning I noticed that from my home page drop down under My Sites, WP Admin is actually one of the tabs. Yes! Eliminate extra clicking!)

11 thoughts on “Updates, Schmupdates: or, if it ain’t broke, do an update”