I think I might have been the first item they purchased for the cottage.

I was reduced to being sold for $35 at the Habitat for Humanity Restore in Washington. It was absolutely humiliating, but they were very delighted. She wrote about it in her second post 2. The Sanding Queen, dated May 30, 2012 and called it a great deal. I shudder to think of it.

This is what I looked like the day they bought me.

Yes, I admit I was no beauty anymore; I was a bit down and out, but I had solid black wrought iron underneath, and at one time I was imposing. (Imported from Europe, but I don’t like to brag.) Plus, I lived Large. Lots of people could squeeze around me, say grace, shout about the mashed potatoes, spill gravy, slosh coffee, and just, well, eat, drink and be merry. I was a table that said Home.

I heard her say that she was just going to paint me and let me be a shabby chic table;  I don’t know what that means, but I am no Shabby Chick! I put all my hopes on the man; I could see he was a carpenter — all those tools! He could appreciate nice looking wood, even if I was just a fancy veneer over plain pine.  Everyone has a veneer, right? And my heart and covering were both good solid woods. (And I do have great, curvy legs, if I do say so myself…) When the man got out his sander I was a bit nervous, but he was easy on me and I came out looking like this: 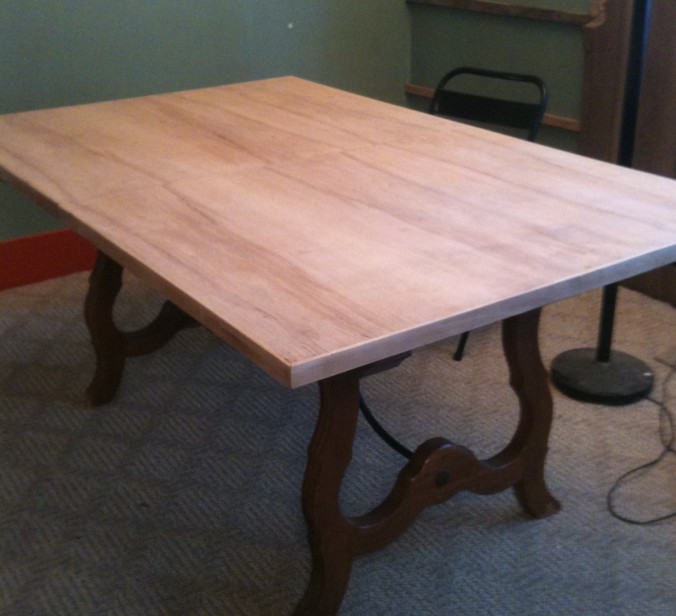 I tell you I was thinking, Yes! Now I’m home and there will be real meals again! And then I was covered up in layers of plastic tablecloths, sheets, and tarps, and it was back to being a work table for two more years! Even though They Said they were going to fix me up, I was  beginning to lose hope.

Then she uncovered me, moved me around, and started with the sandpaper on my legs… I wasn’t sure what to think about that pot of green paint she had with her. I thought that whole paint thing had been taken care of already. I made her bump her head a few times before I decided I kind of liked that silky green paint on my legs…

But still they hadn’t done anything to keep those gravy stains from permanently damaging my new complexion. When they finally moved me in place, I tried my best to look like I needed a vacation to the islands or somewhere sunny. Alas, all they did was give me a fake tan. But that oil rubbed on my skin did warm me up, and three coats belonging to Polly somebody have just brought out my inner glow.

At least they have fixed up the walls I’m sitting beside. Talk about shabby? Oh, my! And those little lights above me are very sweet — they can be dim or bright depending on their mood, but we all have our little quirks, don’t you think? I think we’ll get along fabulously.

Am I not beautiful?

What concerns me now is the chairs she might surround me with… I don’t want to tangle legs with mismatched Duncan Phyfes or lazy benches or painted-up shabby chicks. And no bistro chairs, please. What is a redeemed table to do but worry about the company she keeps? I think several upright parson’s chairs would do quite nicely, thank you. 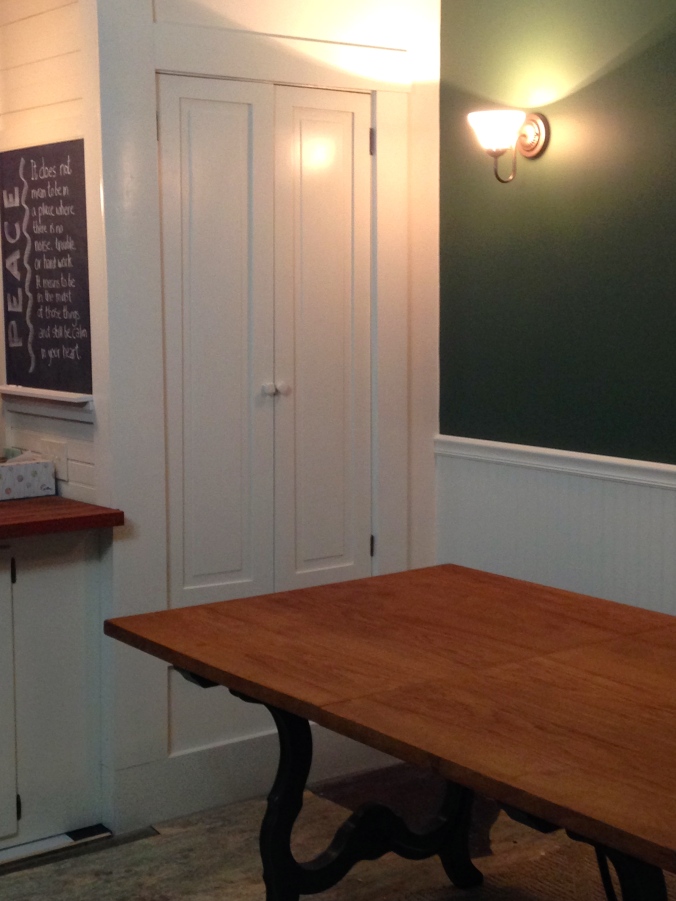 “Eh,” she says, “you’re getting a bit uppity don’t you think? I don’t need La Table telling me what to do!” 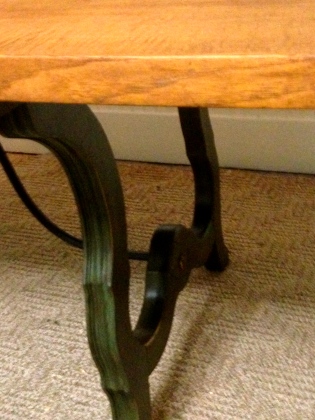 But may I quote Better Homes and Gardens here? The dining table is “a substantial piece of furniture that sets the tone for the entire room…”

“Ahem!” she says. “I saw another table just like you today for sale at Construction Junction for $45, so don’t go upscale on me!”