We’ve been fighting with our stuff these last few weeks, and it’s been getting me down. I haven’t written about stuff lately: I’ve been shredding it, organizing it, recycling it, boxing it up, throwing it out, giving it away, … And truthfully?

And then I came to this: 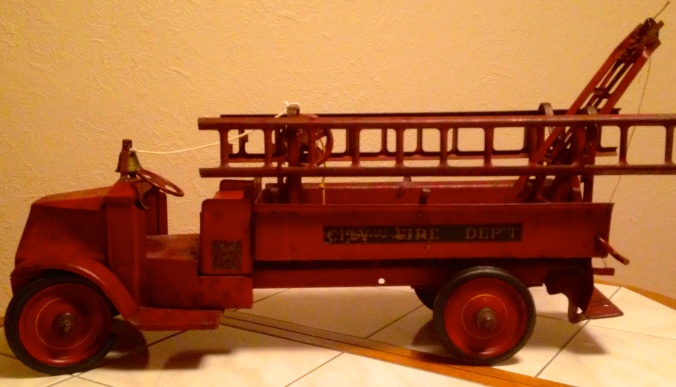 This is the cleaned up version. For the last three years it has been relegated to the floor of my upstairs sewing room where it’s been catching dust rather than putting out fires. And let me tell you, this baby catches a lot of dust.

What to do with this cool old maybe-worth-some-money toy?

This Mack Hook and Ladder truck was manufactured by Steelcraft in Cleveland Ohio sometime between 1928 and 1935. It has two ladders on the sides that attach to a ladder in the back. When these ladders are put together, they are over three feet high. A kid could put out some mighty fires with this thing.

The ladders also can be cranked up and down — the deluxe model. But in 1930, there were no warnings on toys; this Mack truck could do some damage… It has string that could choke; small parts that could fall off and hit; clips that could pinch fingers, and seriously sharp ladder edges that could poke an eye out. But it also has a real brass bell that dings and a hose that unwinds… Generations have played with this truck — my kids played with it and lived (with no serious injuries).

It belonged to my mother’s brother, Uncle Donnie. I never knew him; he was killed in World War II in France in 1944.

I don’t know much about him. My grandma, Nanny, always started to cry when his name was mentioned, so we never talked about him much. Mom only said that she was the kid sister, and just as she was getting old enough for them to be friends again, he joined the army and went off to war. He was a smart kid, an intellectual-type, who graduated from high school in 1943, went to college for one semester, and then went to war. A young boy who probably never wanted to be a soldier… and yet, he went, he served, and he died. At age 20.

He served with General Patton’s Third Army in the infantry. On October 26, 1944 the local newspaper published an excerpt from his letters home. It is a very long article, and I’m skipping here and there for these quotes below. 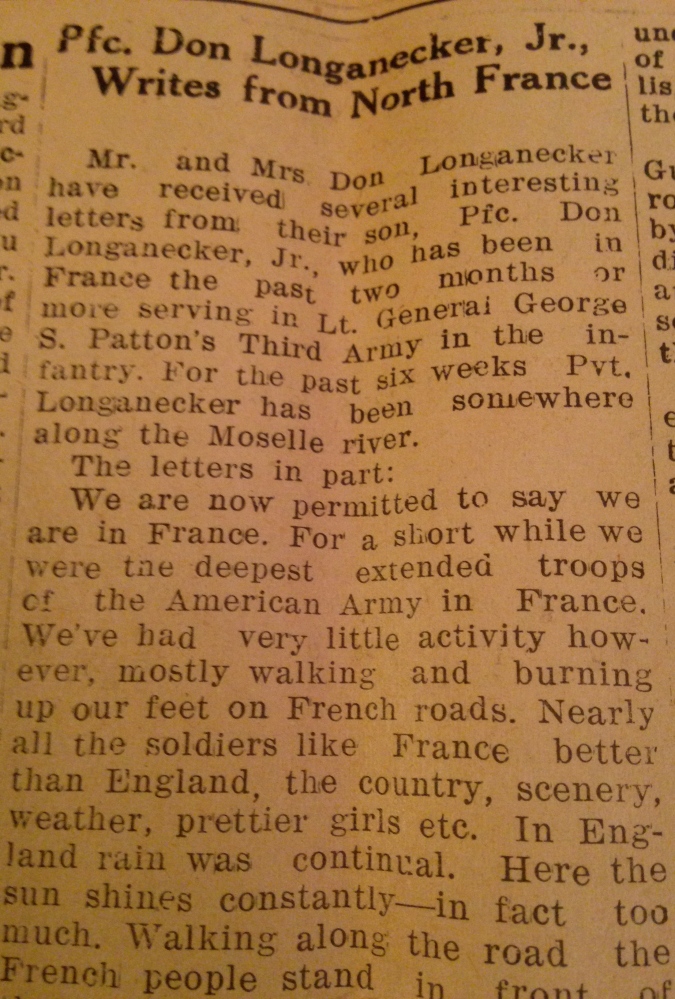 …the French people stand in front of their homes (some of which have been bombed) with pitchers and glasses of cider and wine. The only trouble with the cider is that it’s hard instead of soft… Since I wrote you last we have done a lot of riding over France. Also a lot of walking both day and night. I never before realized France was such a beautiful country. Excellent terrain for fruit trees and agricultural rolling land, mostly level, with acres of wheat, oats, hay and grape vines neatly taken care of. We were about a month too soon for the plentiful supply of apples, grapes, etc…. Where I am now acres and acres of fields of wheat, oats, etc. are going to waste because of fighting around them… Last night I slept in a trench for the first time and didn’t sleep badly. A fox hole will probably follow… 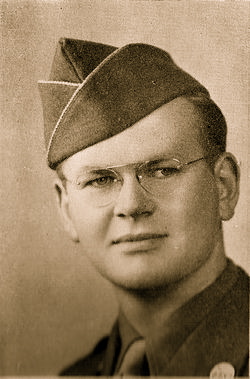 We had our first hot water showers yesterday since our arrival in France. You can imagine how we felt. We’re hoping to get some clean clothes soon…The past ten days or two weeks have proven rather rough and tough for some of us. Especially in the way of sleep. Strange thing about it though is that when we get a chance to sleep, we just can’t seem to close our eyes…

Yes, the war news is good, but don’t let the newspapers make you believe the war is about over. I’ll tell you one thing, if we didn’t have air supremacy, I don’t know what we’d do. You don’t see any German planes by day and few by night…
Sept. 24. A lot of guys are getting souvenirs lately such as German pistols, knives, belts, etc. I don’t think I’ll bother with anything like that… Besides I’m not interested in souvenirs — just am anxious to get this thing over as soon as possible and get back home…

His obituary says he was killed on November 8 between Nancy and Metz in Northern France.

And I have a few photos. A yellowed newspaper article. A letter from the War Department. His obituary. And his firetruck.

10 thoughts on “102. The Vintage Firetruck and its story”