It is the oddest feeling. The feeling that is in the back of your mind that you have to do something. Something important, that you’ve forgotten. And then you realize that no, you didn’t forget; you don’t have anything that has to be done! You can go back to bed if you feel like it. You can spend three hours reading if you feel like it. And the laundry that’s piling up? It will be there tomorrow, and you don’t need those clothes anyway because you can spend the day in yoga pants and a hoodie.

Forgive me if it sounds like I’m gloating, and don’t worry, I’m not turning into a sloth. But rarely in my life have I not worked, and even part-time work necessitates organization and a schedule of sorts. Grocery shopping was done on certain days, laundry was done on certain days, housecleaning was for Saturday, and if any unscheduled reading was done, it was before bed and NEVER in the middle of the day.

Pair all this freedom with a Polar Vortex (Are we in the middle of a science fiction novel or something? Who came up with that name anyway?) and a husband who is away, far away, in Haiti (where there is no Polar Vortex) and I can say it’s just been one odd feeling after another. Today, I studied the Psalms for an extra hour; I did the laundry (even though I didn’t have to–I have indeed been living in sweats); and I only went outside to get the mail and dump the compost. (The cat wouldn’t go outside either; I opened the door for him and he shook his paw and glared at me.) Cold winter days are absolutely the best days to make bread, so I made two loaves of Cranberry Walnut Sourdough bread. Except I didn’t have cranberries. So it’s really Cherry-Walnut Sourdough bread.

I’ve been messing around with sourdough since September when I got a starter. I’ve heard one is supposed to name the starter; mine still has no name, though I have given bits of it away to three people now. We’ve had loaves of bread, some good, some not so good, sourdough pancakes, sourdough biscuits, sourdough rolls for Thanksgiving and Christmas, sourdough corn bread… Mostly the recipes have been wonderful, but I’ve never been completely satisfied with the loaves. They were okay, but not bakery worthy. And I’ve made bakery-worthy bread before, but sourdough is different. 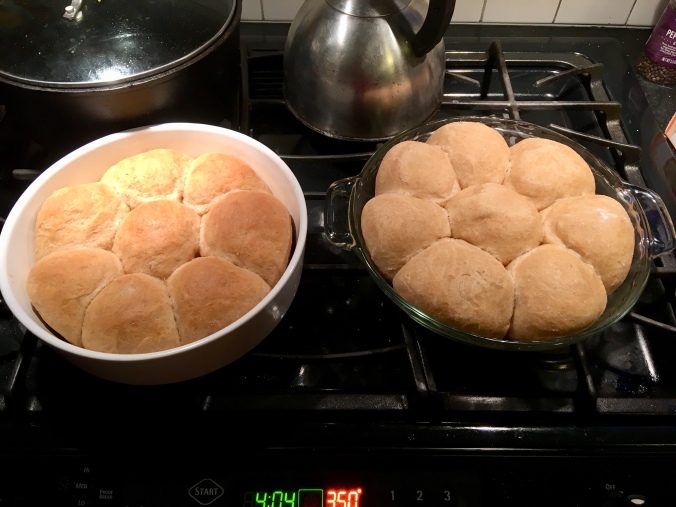 Bakery worthy sourdough rolls, and yes, I got up at 5 AM to bake them–Baker’s hours–because I had to go to work that day. But they aren’t entirely sourdough because they have added yeast.

Sourdough is meant for retirement because baking true sourdough bread takes sometimes up to three days…It is slow and on its own time. You have to wait for it, and when the dough is finally ready, and you have to go to work, well, the best you can do is put it in the fridge to retard the rising and hope you haven’t left it for too long.

Sourdough is meant for retirement because since you have nothing to worry about anymore, the sourdough experiment will give you plenty to worry about. What is a levain? What is an autolyse? And what if I don’t have a baking stone or a peel or a banneton or a brotform? And heaven forbid that all my kitchen towels are cotton with not a single linen one among them. Not only that, how could I, a decent enough bread baker not know what a boule or a batard is? It’s enough to make one want to go back to work.

Early in the Sourdough experiments I came across this Cranberry Walnut Sourdough recipe at The Perfect Loaf. She had labeled it Beginner. The recipe, printed out, is 4 pages. I put it away, terribly intimidated by all those words I didn’t know. And I happily tried other, simpler, sourdough recipes that were closer to what I knew. None of the results were a bread-lover’s dream. They were edible, particularly when toasted, but I wanted more. (Especially because Mr. H.C. got me an Emile Henry bread pan for Christmas and I wanted to do it justice. Can’t have mediocre bread coming from an expensive pan…) 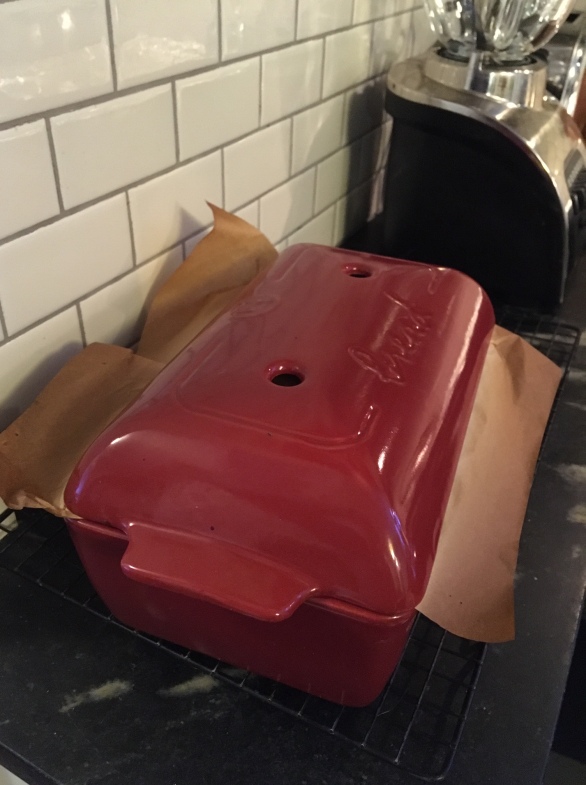 I refused to be terrified of this 4-page, 3-day recipe with alien terms. After all, I am a master jack-of-all trades. So I dutifully looked up all the unfamiliar words. I read the Flourish blog on Sourdough Basics, that yes, uses bannetons and linen cloths, but also gives alternatives. So armed with my kitchen scale, I tackled 800 grams of flour and 880 grams of water. Yes, I weighed the water!!! Alas, though, I had to guess at the water temperature; I only have candy and meat thermometers that don’t go as low as 73 degrees F. I stretched and folded the sticky mass of dough 5 times in 30-minute intervals. (800 grams is almost 7 cups of flour! That’s another reason why I didn’t want a fail–who wants to waste that much flour?)

Cranberry Walnut Sourdough Bread (This is a batard, otherwise known as a regular rectangular loaf of bread.)

…with a lovely sourdough crumb.

My first attack on this recipe came up lovely. Truly it was my first bakery-worthy sourdough loaf. We didn’t have to toast it, and it was gone in two days. It sliced thin for sandwiches–and it might be worth cooking a turkey just to have sandwiches from this bread. I’m making the second batch (with cherries) right now; as I’m writing this, I’m smelling the nose-tingling aroma of bread baking. There’s nothing like it–I wish I could bottle it and send it over the internet, so you could enjoy it too. (No wonder Jesus said he was the Bread of life.)

But I’m not confident yet. There are just too many questions about this whole Sourdough Experiment. I put the loaf that is baking now in an enameled cast iron pan with a lid, but it rose too fast and too high and I had to bake it without the lid. The whole reason I used that pan was for the lid to create the steam! It certainly has a great oven rise though. The other loaf is in the fridge still, rising in my substitute wicker banneton with a well-floured cotton towel. I’m baking it tomorrow morning (the third day) on my cast iron griddle, which I hope will substitute well for a baking stone. All these issues! It’s a good thing I’m retired and don’t have anything else to think about…

And this is a Boule, otherwise known as a round loaf. You can see why the lid wouldn’t have worked…

18 thoughts on “Thoughts on Retirement and Sourdough Bread”

Follow the circle of life on WordPress.com
Join 3,367 other followers