It’s been a long time coming.

Sometimes there were months when nothing happened except, you know, Life. And death. And taxes.

There is so much work to do on this small humble cottage. New windows. New roof. The bathroom still isn’t done. Each room we do needs to be rewired. The back porch and the garage and the driveway need some TLC. And Mr. H.C.’s workshop is still a disaster area. But…

…there is so much that Has. Been. Done. And last month I promised you pictures. So here are some Befores, Durings, and Afters:

Mud Room/Entry
We left the mudroom a few posts ago with the floor finished and hardiebacker board under the window awaiting tile of some sort. After a few days of waffling, we bit the bullet and went to a tile store. We had in mind black slate, but we ended up with black travertine subway tile. It looks gorgeous, but it doesn’t photograph well, so you’ll just have to take my word for it. We got the wood stove hooked up just in time for Frigid February, and Henry the cat found a new favorite spot to snooze the month away. We, on the other hand, worked the month away, delighted to have the house warmed by a toasty wood stove. All three of us fought over the rocking chair in the evening. 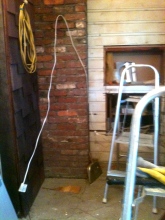 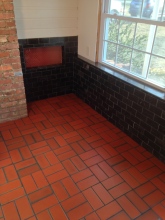 Ready for the wood stove 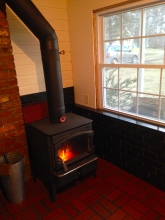 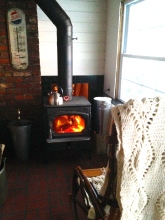 The teakettle is always hot. 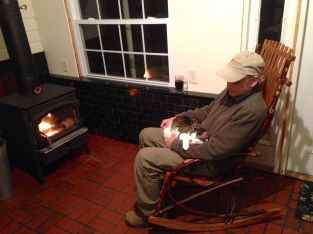 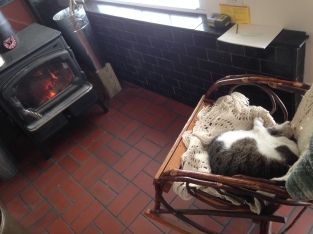 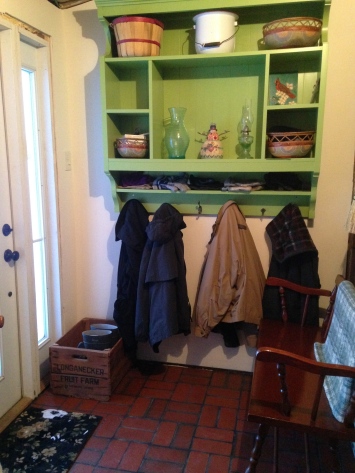 A view of the other side of the room 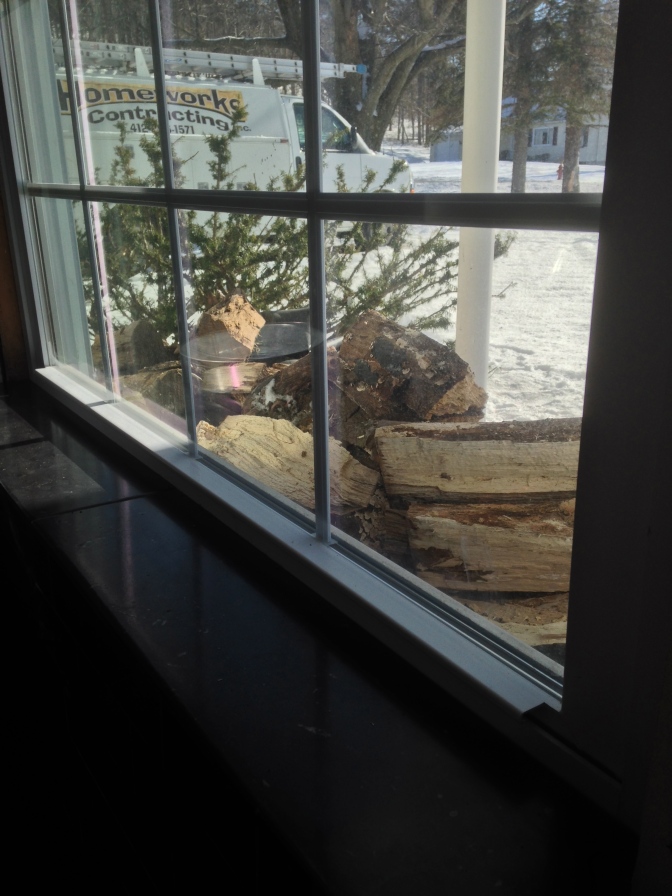 And we just open the window for firewood!

Mr. H.C. spent the better part of two weeks taking up boards from the old floor, trimming the ends, and replacing them like a jig saw puzzle. In the end we only had to buy four new boards to put against the far wall. They stained a tiny bit differently — but only we would notice. 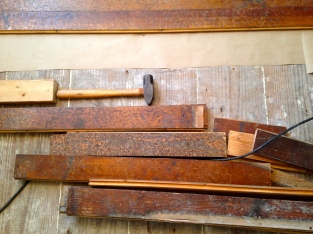 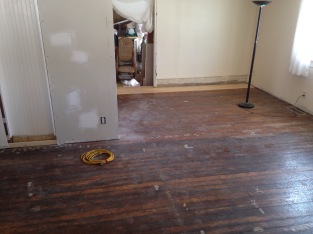 You can see the new boards at the far end. 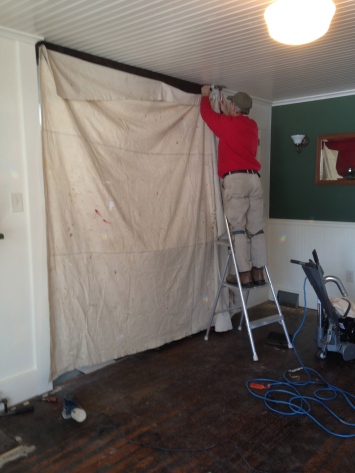 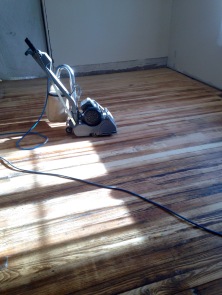 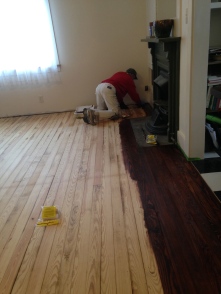 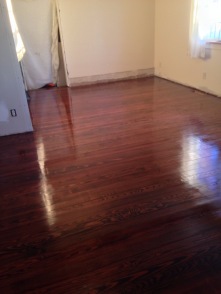 …and two coats of poly.

For three days we had to go outside to get to the bedroom, and this was during the nationwide frigid temperatures of February. Henry the cat was most unhappy as he was imprisoned in the basement. Here he is tiptoeing against the wall on his first foray upstairs: 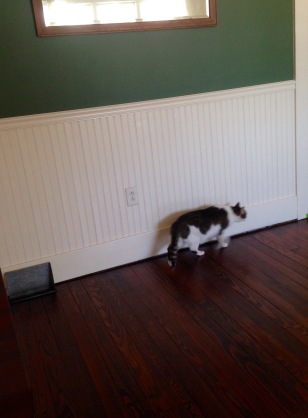 Sixth Wall in the Living Room

The wall going into the bathroom had to be ripped out. We wanted a pocket door to make more space in the bathroom, so the doorway had to be moved to the center of the wall. A heating vent also had to be moved. The last wall is still in progress, and the door is awaiting painting. We reused the same door and Mr. H.C. bought the pocket door kit at a Habitat for Humanity Restore for about half-price. 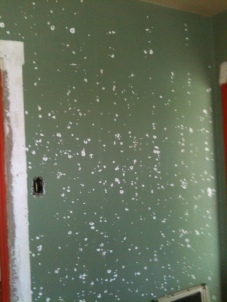 It looks like someone took a shotgun to it, but it was really just Clara’s picture wall after we stripped it of wallpaper. 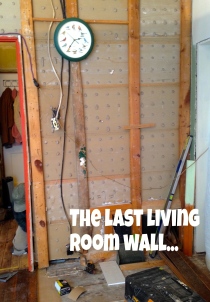 It’s looked like this for at least a year… 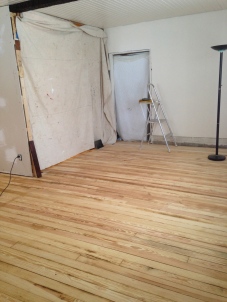 We knew we wanted bookshelves along the back wall and over the door; we just weren’t sure how they would take shape. But with an inspiration picture, Mr. H. C. pulled it off again. If you ask me, these are the highlight of the room. 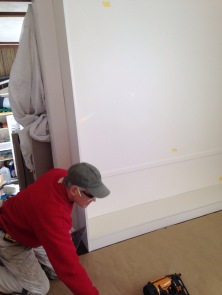 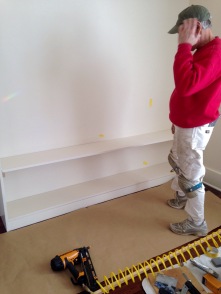 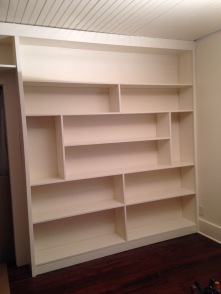 Moving Day
Saturday March 7th dawned cold and sunny. We had been chipping away ice and snow for the last day and a half. The truck was picked up, our friends were cheerful, and the heavy leather couch got moved without any damage (to the couch or human backs). The city mice were finally moving to the country… 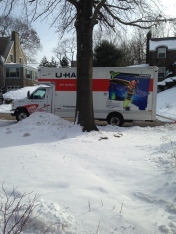 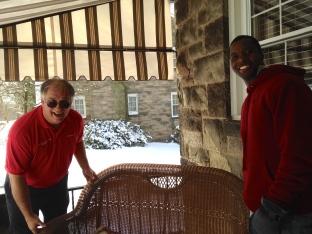 But friends Rick and Rony were cheerful 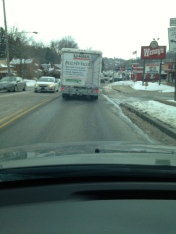 And we’re off…
And we were so excited to get here, that we didn’t get a single photo of Pedro and Pete, our moving helpers on the country end.

In decorator speak, it’s called the final reveal… But I look at it and think, “Wow, is this really the cottage living room? Where there were once dead mice in the walls? And a terrible smell in the floor?” 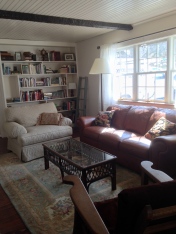 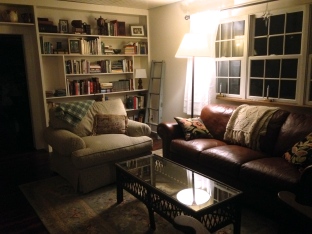 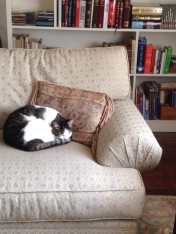 And Henry finally has his favorite chair back. 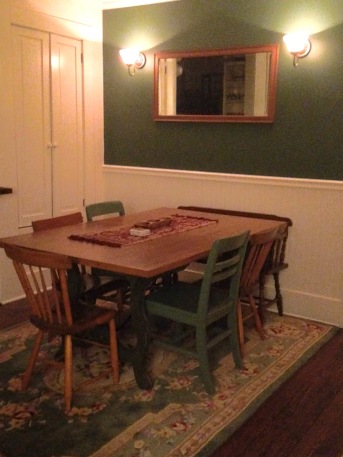 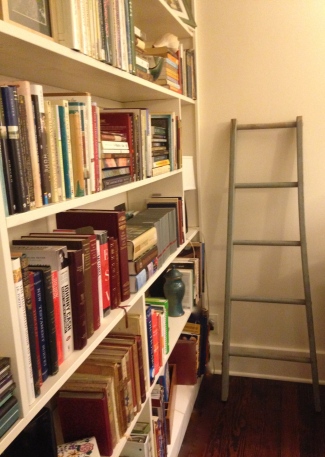 We found the ladder under the house.