Somewhere about last April, I boldly pronounced that the next big project would be to move the kitchen stoves around. Yes, well…
It is January. I’m aware of that. One thing I’ve discovered while writing this blog: even though I write about what is going to happen, that doesn’t mean I have control.(In more ways than one…) I always have big plans in my head! Sometimes Mr. H.C. refuses to listen to those plans; sometimes bigger events happen that always serve to remind me who Is in control.

I’m certain that I whined a lot about the stoves. I had many good reasons to whine: 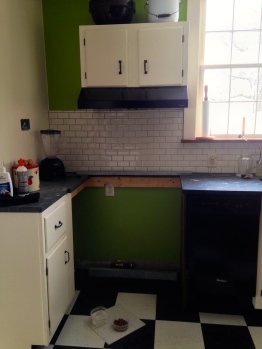 We also had to relocate Henry the cat’s food and water; nothing like having to search for your dinner bowl…

Switching stoves was definitely an ordeal, but we managed to get them both moved last weekend without dropping either stove on anyone’s foot, without either stove sliding off the dolly, and without anyone hurting his back. And we are filled with relief that we don’t have to switch refrigerators!

Safely inside, still strapped to the dolly. If you look closely, you can tell that it’s not gonna fit…

The thing about this beautiful black range is that it just isn’t regular. It borders on being a built-in, and even though it has the same dimensions as most stoves, there are just a lot of quirks. It was 5/8 of an inch off, and something had to give. It was either cut the soapstone countertop or cut the cabinet or cut the wall. The wall won — the cabinet is now recessed 5/8 of an inch into the wall. 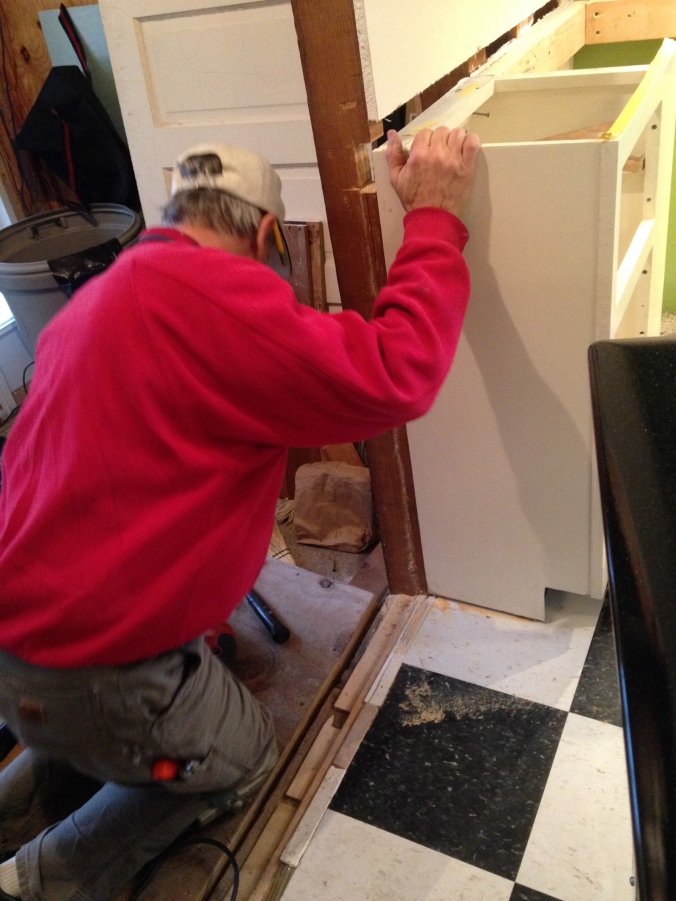 The dry wall was cut out, and the stud at the corner was notched to enable the cabinet to slide back 5/8 of an inch.

Once that side was done we pushed the stove in place, but it wouldn’t go far enough to the back wall. Turns out, the gas hookup had to be lowered. Twice. The floor even had to be cut out around the pipe to get it low enough for the back of the stove.

See the flooring cut out?

I’m blessed to have an even-tempered, patient husband who did not once throw a tool or utter any curses (at least out loud). All told, it took nine and a half hours — we unloaded the stove from the truck at 10 AM and Mr. H.C. turned on the gas around 7:30 PM. (Yes, the pizza delivery guy knows where we live.)

Henry in a prison of his own choosing…

Henry the cat, however, was not even-tempered. The noise of various saws and drills and air compressors drove him to the basement where he sulked all day, hidden behind some boards. This was so unlike our usual placid kitty, we actually thought he had suffered a kitty stroke. It’s not as if he’s never heard power tools before… Mr. H.C. finally took down a box and a blankie and set it near the heater vent. He curled in, and we shut the door to keep out the noise.

It’s a good thing he’s skinny. I had to slide over a ladder and he stepped out on to the ladder rungs to get out.

To busy myself while all this was going on, I cleaned the stove! And I have another gorgeous tip for all you people out there who love organic cleaners. I love to clean with vinegar and baking soda, but I don’t love the smell. (Drum roll, please…)

Put your orange peels in plain old white vinegar and let it sit on your counter for a few days. It smells so wonderful, you can hardly tell it’s vinegar! Well, okay, not quite. But it sure beats the smell of the plain stuff. It smelled so good, I’m going to use some of the next batch for cole slaw dressing. And I’m also going to try it in Olive Oil. Have any of you ever been to a Vom Fass store? Delicious Vinegars and oils in pretty little bottles and very pricey! Yep, I’m makin’ my own Extra Fancy Orange Vinegar! 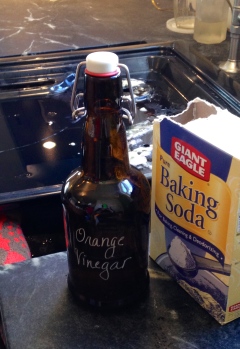 Back to cleaning the stove — the baking soda and orange vinegar did a perfectly serviceable job of cleaning the top. I had actually cleaned the oven about a month ago in anticipation of moving it, so all I did with the oven was give it a wipe down; but the baking soda and orange vinegar fizzed off the caked-on brown stuff on the glass of the oven door, too. It is so clean, it reflects the floor! 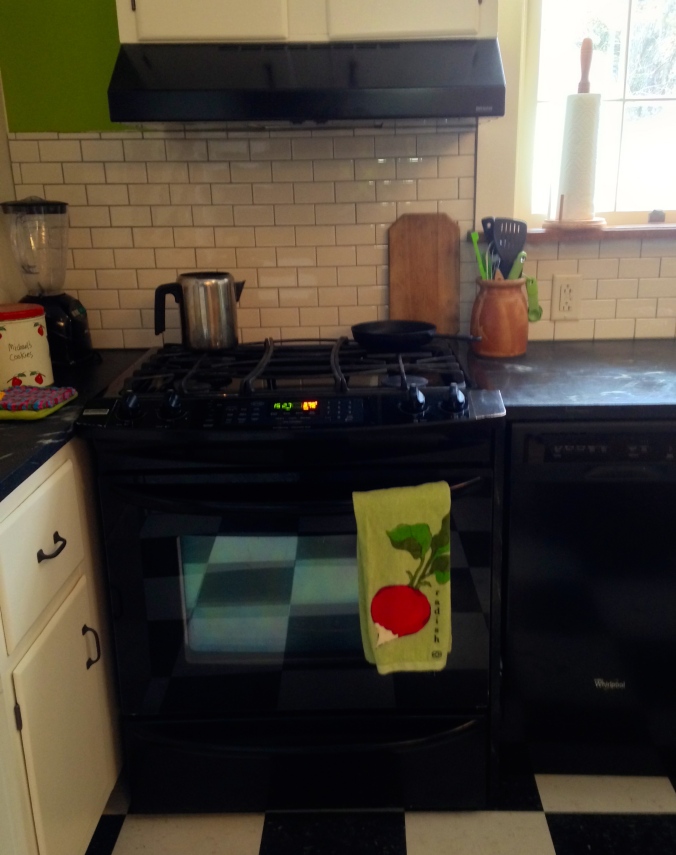 It didn’t take long for it to collect pans, teapots, a utensil jar, and a pretty new towel…

And here’s another shot from a different angle:

Yes, I cleaned and oiled the countertops just for this picture.

Our first meal was baked salmon. And next week I’m baking this Coconut Lemon cake from Foodie with Family for someone’s birthday…I think he deserves it!